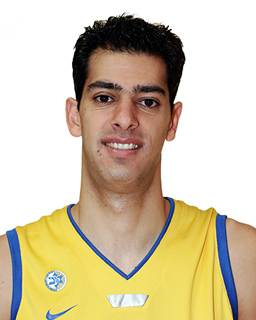 One more point was needed to top Group E

Real Madrid pulled Maccabi to a tedious & ugly game but eventually Maccabi won 73-58, exactly the same margin as in the defeat in Madrid. Shason & Baston at their best

Pini Gershon was furious at the end of game. His team has hust bearen Real Madrid by 15 pts but the coach did nit like the way they did it. "I did not know the drills. I did not teach them to play like this", he complained. But Gershon also knows that at the end of the day the result counts. And that was far beyond the pre game predictions. Everybody who knows coach Bozidar Maljkovic should have expected that Real will play a slow, well controlled game to prevent Maccabi from running to wipe out the 15 pts deficit. The problem was that Maccabi let them dictate a style of play which is strange to them. Maccabi started well and at the end of the first quarter led 22-14. But in the second period Sharp & Co scored only 11 pts to 2 by the visitors who took a 36-33 into the break. In the first half Maccabi made only 1-9 for three points and were 16-21 down in rebounds. Five minutes into the third period the score was even 44-44. Then came the big breakthrough led by Sharon Shason with two three pointers, a great penetration all the way to the hoop and another one with an assist to Maceo Baston. Maccabi ran 10-2 and ended the period on 54-46. Real opened the final period with a three points play by Hamilton and a three pointer by Rakocevic. The lead was cut to 55-52. Then came three consecutive three pointers by Sharp & Shason(2) and with five minutes to go, the home team had a 66-52 lead. Suddenly people realized that a 16 points is a real possibility. Real reacted with 5 pts (67-57). Parker & Baston made it 71-58. And then, with 59 seconds left, Baston made a great steal, ran down the court and slammed the ball in to make it 73-58. Maccabi had two more chances but turned the ball over. Both teams are now in a 3-1 record but Real keeps to place in Group E on a slightly better goal difference. What a difference in the second half. Maccabi finished the game on 7-21 for three points and also had a 40-34 advantage in rebounds. Real had a bad shooting night mainly due to Maccabi`s excellent defense – 34% in FG (Maccabi 47%) and 52% FT (Maccabi 71%). An unforgettable night for Sharon Shason on his 28th birthday. He played 25 minutes, scored 16 pts in 67% FG (4-7 for three), pulled down 5 rbds and did a great job in defense. Maceo Baston showed again what a great player he is with an Index Rating of 28 based on 20 pts in 64% FG and 75% FT, 8 rbds & 2 bsts & 7 received fouls. Other Maccabi scorers: Solomon 10, Sharp 9, Parker 8 & 13 rbds & 5 asts, Vujcic 7 & Arnold 3. Penney played but did not score. Top scorers for Real: Reyes 14, Scales 11, Rakocevic 10 pts. In Istanbul Ulker won its first game in the Top 16, beating Climamio Bologna 84-80.