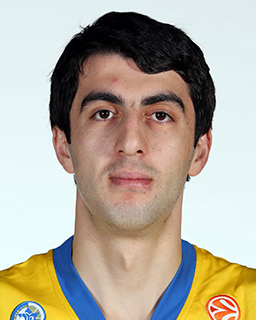 Maccabi Electra Tel Aviv returned to Nokia Arena and treated themselves to an emphatic 94-62 victory over Hapoel Gilboa Galil in week 5 of the Israeli Winner Sal League. Shermadini led five players scoring in double figures with 12 points and 10 rebounds.

Maccabi Electra Tel Aviv defeated Hapoel Gilboa Galil 94-62 in week five of the Israeli League. Giorgi Shermadini led five players in double figures with 12 points and 10 rebounds. Ricky Hickman also ended up with 12 points, while Malcolm Thomas (8 rebounds) and Shawn James (6 rebounds) each contributed 11 points. It was also a great game for Sylven Landesberg, who had 10 points (3/3 from 3 point range), and Yogev Ohayon who had 8 assists.

Starters were Yogev Ohayon, Lior Eliyahu, Shawn James, Devin Smith and Ricky Hickman. The game got off to a slow start, with Maccabi taking a 5-2 lead in the first minute and a half. Gilboa played with plenty of intensity, going for steals at every opportunity. Maccabi moved the ball well, especially on a bucket by Smith off a dime bounced off the backboard (Malcolm Thomas) that set the score at 13-11 just past the halfway mark. Gilboa fought their way to an 18-13 lead with three minutes left in the period. Maccabi narrowed the gap with points by Thomas, who went on to score another two straight buckets to put Maccabi back on top, 19-18 at the end of the first quarter.

The visitors scored first at the start of the second quarter to retake the lead, but a tip in by James and a reverse layup by team captain Guy Pnini made it 23-20 Maccabi after three minutes of action. Sylven Landesberg came into the game and immediately downed a trey from the left corner, which was followed by a three pointer from Smith on the right wing, 29-20 Maccabi with just over five minutes left in the period. Giorgi Shermadini added two straight buckets and a hook shot, and the half ended on another perfect three by Landesberg, this time from the right corner, 39-31.

The early minutes of the third quarter were slow, but an ultra-fast-break dunk by Smith (rebound/assist James) livened things up, 43-31 after just after two minutes. James scored off a dish from Pnini, while Landesberg, Shermadini and Thomas added points from the charity stripe. A floater in the paint by Thomas made it 51-37, and Pnini added points from downtown. The final minutes of the period belonged to Shermadini, who scored a dunk and battled ferociously on defense. The score after three periods was 67-47.

Gilboa managed to cut their deficit slightly as the fourth quarter got underway, but a long three and 1 by Hickman made it 76-54 with six minutes left in the game. Layups by Pnini and Ohayon were followed by a putback by James and another three from Landesberg that put Maccabi up by thirty, 88-58 with two and a half minutes remaining. Logan added a dazzling 360 dunk off another steal, and young Itay Segev came into the game and contributed a steal plus assist to James. In the end, Maccabi Electra Tel Aviv defeated Hapoel Gilboa Galil 94-62.