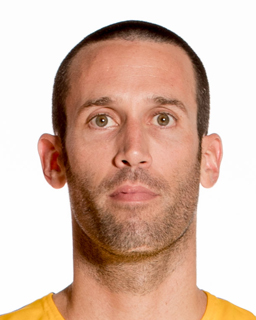 Maccabi continue to build momentum at the expanse of Kiryat Gat

A dominant evening from beyond the arc gave Maccabi an easy win 91:67, its’ fifth in a row. Andrew Goudelock scored 19, Gal Mekel who got 13 and 9 assists said: “it’s nice to come out and contribute after a while”

28/11/2016
HOME · News Archive · Maccabi continue to build momentum at the expanse of Kiryat Gat
Maccabi Fox Tel Aviv got their fifth win in a row, and made it look easy. A strong shooting performance from outside (14/29) led to an easy win – 91:67 over Kiryat Gat.
After a slow start and a 5:14 deficit, it was all yellow with the score overturned before the end of the first quarter and Maccabi opening up a 20 and 30 point lead in the second and third. Andrew Goudelock scored 19 points with 5 three pointers without a miss.
Gal Mekel, who got 29 minutes with Yogev Ohayon and Sonny Weems getting rest, responded with his best showing of the season – 13 points and 9 assists. Sylven Landsberg scored 14 with 4/5 from outside, Maik Zirbes got 12, Guy Pnini scored 11, as did Dagan Yivzori who also got a lot of minutes (17).
Mekel said: “I can only control what I can control, so it was fun to go out there and contribute after a month without playing. I’m always hungry. I had several talks with the coach in which he explained the situation from his point of view. All I can do is keep working hard”.
Rami Hadar said: “I want this team to have good playing habit, but we played well enough to finish the game without creating stress for ourselves. Still, I would like less ups and downs and a high pace for longer stints during the game”. Maccabi will play host to Anadolu Efes on Thursday.