Maccabi Electra Tel Aviv is pleased to announce that American-Israeli forward Alex Tyus has joined the team. Blatt: "A terrific addition to the team." 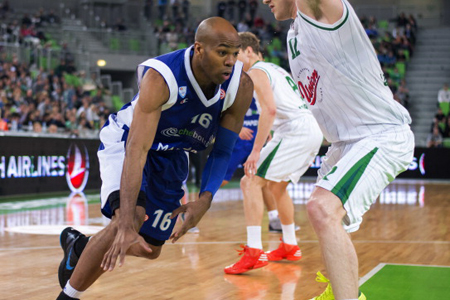 Maccabi Electra Tel Aviv has signed Alex Tyus to a two year contract, with an option for a third year. Tyus (25, 6'8") is an American-Israeli who in the past year completed the process of his conversion to Judaism, and was an important part of the reason for the Israeli National Team's success last year. Tyus is a strong and athletic power forward who can also play at the center position, and is a dominating rebounder and a skilled finisher under the basket.
Tyus, who played for four years at the University of Florida, was introduced to Judaism by his roommate and went on to convert to the religion, along with his wife who has Jewish roots. Tyus played for the Gators from 2007-2011, and in his final season reached the NCAA quarterfinals. In his best year (2008-09), Tyus reached averages of 12.5 points and 6.2 rebounds per game. For a brief time during 2010 he played alongside Nimrod Tishman, a graduate of Maccabi Tel Aviv's youth team.
Tyus's first professional team was Maccabi Ashdod in 2011-12, where he finished with averages of 13.3 points, 8.3 rebounds and 1.4 blocks. That year he was named the Sixth Man of the Israeli League, and together with Ashdod reached the Israeli Championship final, where they lost to Maccabi Electra Tel Aviv.
Last season Tyus played for Italian team Pallacanestro Cantú. In the Euroleague Tyus averaged 8.1 points, 3.7 rebounds and 1 block per game. In the Italian League, his stats included averages of 9.5 points, 6.2 rebounds and 1.1 blocks per game, and a shooting average of 67% from the field. Tyus led Cantú to the Italian League semifinals, where they lost to Virtus Roma after going the full seven games.
Tyus and Cantú won the Italian Supercup in 2012, and he also played in the Italian League's All-Star game. Alex played a major role in the Israeli National Team's qualification for the European Championships of 2013, with fantastic averages in the qualifying round (10 games) of 12.6 points (73% shooting from the field!), 6.8 rebounds and 1.4 blocks per game for the blue and white.
Head coach David Blatt said of the signing: "Alex is a terrific addition to our team. He already has experience playing not only on the Israeli League but also in the Euroleague, which is very important. He will come to Maccabi without fear. He played very well for the National Team, and proved his love for our country. We believe he can be a crucial part of Maccabi for many years to come. Alex will contribute at two positions, the 4 and the 5, and will be a huge help on rebounds and blocks, as well as through the tremendous energy and enthusiasm he brings. Our fans will definitely enjoy his style of play and his dunks."