The Yellow & Blue departed to Moscow towards their first European road game since facing Belgrade. Updates from the first journey away from home, the opponent, and the historical head to head battles between them

After capturing a win against Alba Berlin in their first European game of the season, Maccabi Playtika Tel Aviv will look to add on another W to the win column as they head out on the road to play CSKA Moscow as part of the second EuroLeague fixture of the early 2020/21 season (Thursday, 20:00 ISR time, live on Sport5 - channel 55). Thursday's fixture will be the first Yellow & Blue game outside Israel since matching up against Belgrade in March after the league's suspension due to the coronavirus pandemic.

Under the Russian restrictions, CSKA is permitted to 6,700 fans, one spectator per two seats. This means, for the first time since March 8th against Jerusalem, Giannis Sfairopoulos's squad will play in front of a crowded arena.

The still reigning EuroLeague champions come into the game in a challenging situation. After dropping their first game of the season to Barcelona, on Thursday, they will be shorthanded after 3 of Dimitris Itoudis's players (Semen Antonov, Nikola Milutinov, and Janis Strelnieks) tested positive for COVID-19.

However, the coach still has many weapons to play with newly acquired Tornike Shengelia, who joined the club from Baskonia to strengthen its frontcourt. Mike James, Daniel Hackett, Darrun Hilliard, Will Clyburn, Johannes Voigtmann, Nikita Kurbanov, and Joel Bolomboy round up a well balanced Russian squad. 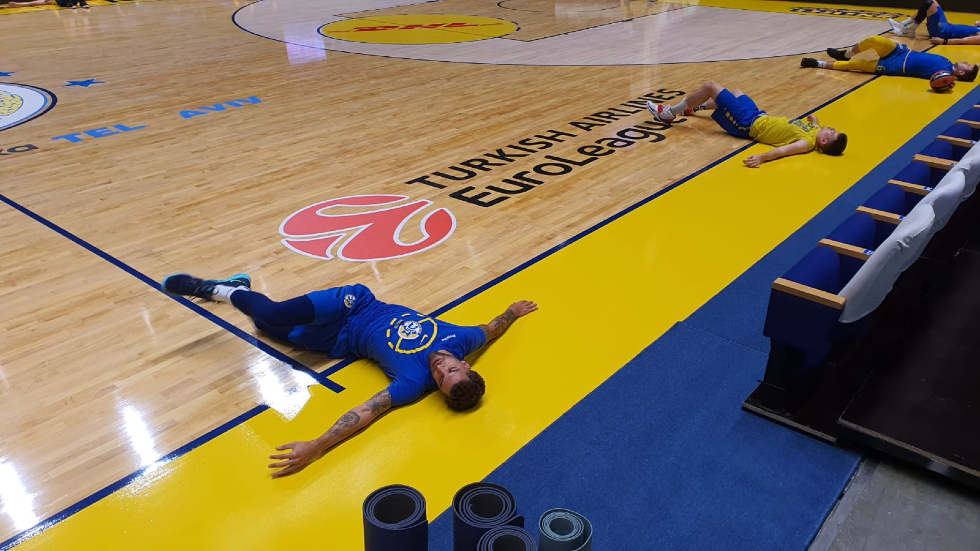 "Like every season, CSKA is a big candidate for the final four, and they've made good transfers", Said Sfairopoulos, who served as the reds assistant coach in the 2011/12 season. "We know they have three unavailable players who won't play due to the virus, but they are still a dangerous team, and they have a good roster with excellent players. We had time to prepare not only for this game but in general. We need to be focused, play our game, and fight for our chances".

"Our concern is to stay healthy, we know that CSKA and all EuroLeague teams will do their best for the safety of the opponents as we do here to guaranty the health of our opponents", The greek coach stated. "Playing around the pandemic is going to play a role this season, and we must stay cautious and understand there is a possibility of getting affected. But at the end of the day, when you go out to play, we only think about the game".

"We are flying on our plane, we will be there only for one night, and we will leave after the game", Answered Tyler Dorsey about the question if any of the players have concerns before the flight. "I'm not too worried, but we are taking the precautionary to stay safe and healthy. We have only one game a week, so we do a lot more in practice than usual during the season, helping us get the new guys gelling and getting our chemistry right. Obviously, the games help that more, but we continue to grow together and get better on both ends of the court". 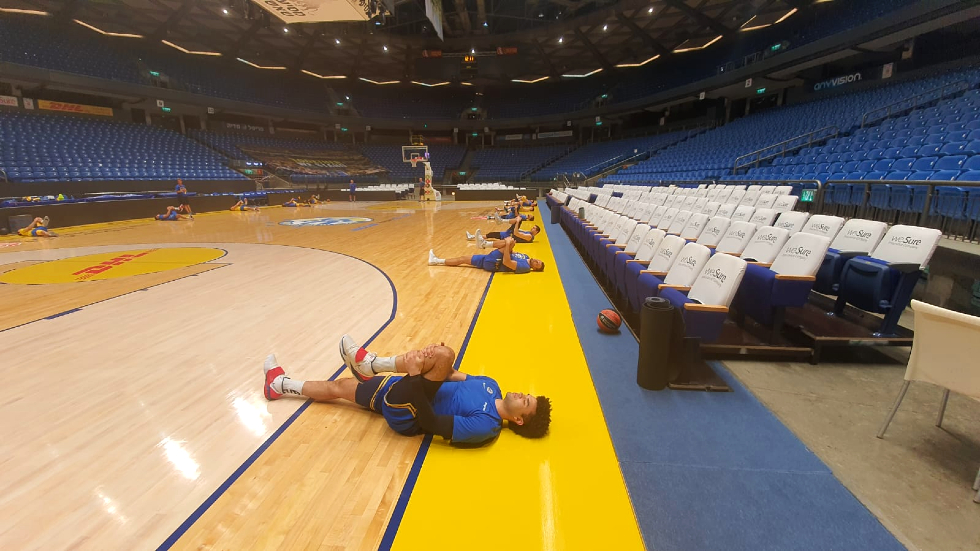 "We decided to come out and play during Corona when we got on the flight go back to Israel, so now that we're here, we are focused on basketball", Said Elijah Bryant. "If CSKA has it our not, we're focusing on basketball, and that's what our primary focus is. We will prepare for their best team. They put their pants on the same way we put ours on, so whoever is ready to play will play them".

"We felt really connected out there on the court, obviously we didn't have a preseason, so we're still getting adjusted to each other, but with time it will come", Added Bryant, who expressed his feelings towards playing in front of a crowded arena in Moscow. "I'm just excited to be able to play the game for a living, regardless of fans or not. It will be a bonus for sure, it has been a while since we played an away EuroLeague game, so we're excited about that".

Throughout the years, the matchup between the teams is filled with historical memories. This century, the Reds maintain an 18:8 record against Maccabi. However, under head coach Giannis Sfairopoulos, the Yellow & Blue holds the better hand, winning their last two head to head games.

CSKA comes away with a 76:72 win over Maccabi

08/10/2020
HOME · News Archive · CSKA comes away with a 76:72 win over Maccabi
Maccabi Playtika Tel Aviv fought for 40 minutes against a difficult opponent on the road. Still, CSKA Moscow hit crucial shots in the closing minutes, which awarded them a 76:72 home win over Maccabi, placing both teams with a 1:1 record. The Yellow & Blue held a 4 point advantage in the opening minutes of the 4th quarter; however, Will Clyburn and Mike James heated up late, hitting shots from deep and connecting from the free-throw line to secure CSKA's first win of the season.

Wilbekin drove to the bucket and knocked in a three, tallying 5 consecutive points for the Yellow & Blue. However, Bolomboy and Shengelia attacked the rim and scored 6 points in the paint for a 1 point Russian advantage, 5:6. Hackett and Kurbanov added, but Dorsey drilled back to back triples that gave Maccabi an 11:10 edge. Hillard punished with 7 consecutive points, as Chris Jones pulled up from midrange to close out the first 10 minutes, 15:20.

Jones found the rising Hunter who acrobatically laid it in, Johannes Voigtmann answered hitting an open three, and Bender grabbed an offensive and tipped it in, 19:23. Will Clyburn's 5 straight points rose CSKA's advantage to 8. Still, Wilbekin got it going from the defensive end, stealing two consecutive possessions, distributing the ball for easy fastbreak points by Bender, and Elijah Bryant, which cut the hosts lead to 4, 24:28.

In the final minutes, the Yellow & Blue kept on diminishing the host's advantage as Zizic grabbed his third offensive board of the half and slammed it home, as Dorsey completed a three-point play to end the half down by 1, 30:31.

Zizic connected twice from the free-throw line, which gave Maccabi a 32:31 lead, Bolomboy three and Hackett from the line restored the advantage, but Bryant scored 4 consecutive points to tie the game at 36. Both teams exchanged points from the charity strike, as Mike James knocked in 7 straight for the reds, 38:43. The visitors went on a 5:0 mini-run, Dorsey drilled two free throws, and Jones finished at the rim, 42:43. After James hit two more from the line, Bender closed the quarter with a three-pointer, 44:45.

Shengelia completed a three-point play to open the fourth quarter, but Maccabi's Croatian's went to work on both ends of the court, starting an 8:0 stretch, which gave Maccabi the lead; The Yellow & Blue ran plays inside to Zizic, who scored 6 points as his countryman Bender prevented CSKA from scoring with back to back defensive stops, 52:48.

Clyburn stopped the run with a triple as Wilbekin got into a zone offensively, scoring 8 for Maccabi, opening a 5 point lead, 58:53. Yet, Clyburn and James took control and turned it around, leading a 13:4 run, grabbing a 4 point lead, 62:66. Wilbekin and Dorsey tallied two from the free-throw line, but James (4th triple) and Clyburn shot over Zizic from deep, giving the hosts a 72:66 lead with 37 seconds left.

Dorsey hit a quick three-pointer cutting the edge by half, Clyburn notched two from the line, but Wilbekin hit a shot from deep, reducing the Russian lead down to 2, 20 seconds left. But Clyburn stayed perfect from the charity strike knocking in his 8th and 9th shots concluding Maccabi's last chance, 76:72 CSKA.