The Israeli champions close out the six-game road trip versus Sarunas Jasikevicius's squad, who is coming into the matchup as the EuroLeague leaders

Maccabi Playtika Tel Aviv visits Barcelona on Friday night as part of the 15th EuroLeague fixture of the 2020/21 season (22:00, Live on Sport5 - Channel 55). The 5:9 Yellow & Blue team looks for a quick turnaround after the road defeat to Villeurbanne as Omri Casspi, who sat out on Wednesday, is expected to return to Giannis Sfairopoulos's squad.

"We play against the number one team in the standings", said coach Giannis Sfairopoulos ahead of the game. "Barcelona, especially in their home court, are playing with high intensity on both ends of the court. We have to be concentrated for 40 minutes and to adjust to their speed. We need to follow the plan and play smart on both ends of the court".

"The last game was a tough loss but we need to put it behind us and get ready for one of the toughest teams in the EuroLeague this year as we continue with the double week", Scottie Wilbekin told maccabi.co.il. "Barcelona is a team with so many weapons and it's our job to stop them and excute on offense". 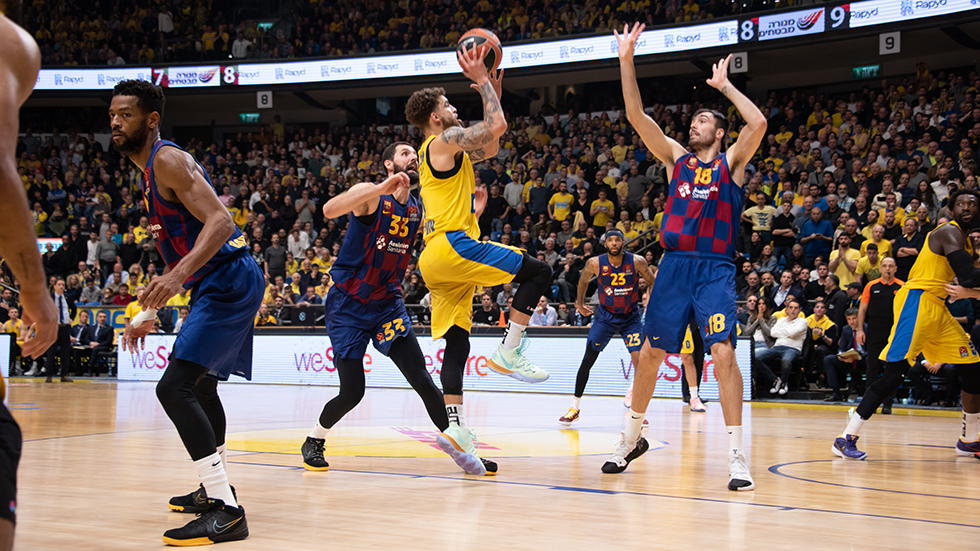 Sarunas Jasikevicius's unit seems to be one of the most challenging hurdles this season, leading the standings with an impressive 11:3 record while on their home court, the Spanish squad holds an 87.5% win rate.

Barcelona's roster is stacked with top EuroLeague talents such as Nikola Mirotic, Nick Calathes, Brandon Davis, Cory Higgins, and some of the strongest supporting casts seen in recent years. Barcelona showed their full potential multiple times this season, defeating Alba Berlin on the road by 36 points as they responded the next gameday with a higher outcome, beating Fenerbahce by 42 points.

Friday's contest will be the team's 44th head-to-head matchup over the years. Barcelona holds a 27:16 record, and since the start of the EuroLeague in 2000, Barca leads 16:9 and 11:1 in Spain. The last game between the two was in Menora Mivtachim Arena as Maccabi won 92:85. Tyler Dorsey (19 points) and Scottie Wilbekin (18 points) had an impressive three-point shooting night, while Angelo Caloiaro and Yovel Zoosman played great on the defensive end.

For the first time in 15 years, the Israeli champions win in Barcelona, ending a ten-game losing streak. Bender led the Yellow & Blue scorers with 15 points

Maccabi Playtika Tel Aviv recorded a hard-fought 68:67 win over Barcelona in the Palau Blaugrana, registering their first triumph in 15 years in Catalonia's capital. Giannis Sfairopoulos's squad displayed an impressive defensive contest, staying within striking range throughout all 40 minutes. In the final moments, the Yellow & Blue showed a lot of fighting spirit, ramping it up defensively, defeating the EuroLeague standings leaders after Scottie Wilbekin dished an alley hoop pass to Othello Hunter slammed it down for the win.

Mirotic and Calathes scored the first two field goals, but Maccabi's defense locked in, tallying six unanswered points, 7:4. Bender shot in three consecutive buckets inside as Wilbekin drove to the bucket and dished an alley hoop pass to Hunter, who slammed it hard with one hand, 13:8.

Omri Casspi entered off the bench, posted his defender for two points, and dished an assist to Ante Zizic, who hooked the visitor's 17th points as Higgins knocked in back-to-back baskets concluding the first quarter at 17:12. 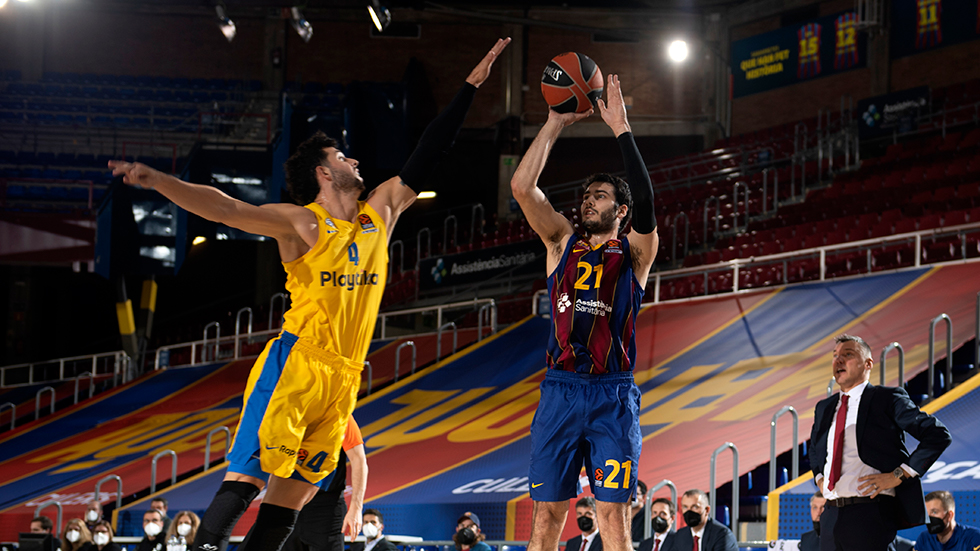 After a Tyler Dorsey triple, Jasikevicius lifted Kyle Kuric off the Spanish bench, which delivered two straight three-pointers, tying the game at 20. The Yellow & Blue came out of the timeout with a beautiful out play as Wilbekin found Bender, who laid in two, and later added his 10th point after Wilbekin recorded his fifth assist of the half, 28:25.

John DiBartolomeo hit two free throws opening a five-point edge, but in the final two minutes, Mirtoic led the hosts to a 7:0 stretch converting four straight from the charity strike and tipped a last-second shot giving the hosts a 2 point margin at halftime, 30:32.

Rolands Smits and Higgins hit consecutive triples to open the second half, but Maccabi responded as Wilebkin drilled his first three of the game, and Caloiaro scored two baskets in the paint, 37:38. Bryant dished his fifth assist to Bender, who gave the visitors the lead, yet Mirotic, Higgins, and Calathes regained the advantage, 39:44. 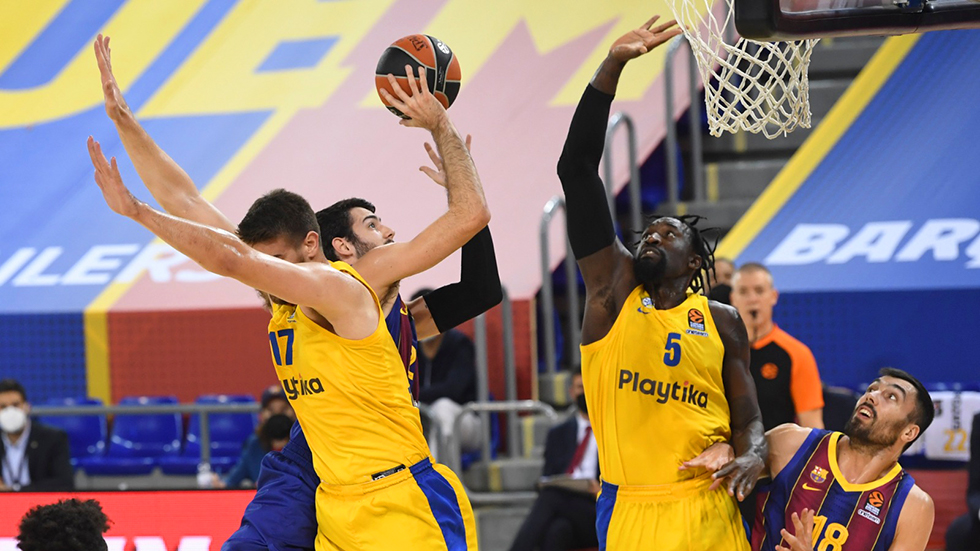 Hunter dished an alley hoop pass to Bender, who tipped it in and added one more from the free-throw line as Pustovyi and Dorsey exchanged free throws. Dorsey drilled an important shot from deep for his 10th point, Bryant drew a foul and scored two from the line, but Abrines had the final points of the quarter, 53:54.

The hosts scored the first three points of the quarter, yet Yovel Zoosman grabbed offensive boards, which led to Dorsey's three-point possession, who continued his good offensive second half. Jones drove to the bucket, laid in with his left hand, and next possession dished an assist to the open Bryant, which gave Maccabi a three-point edge, 62:59. Barcelona came out well after a Jasikevicius timeout, Calathes and Kuric knocked down back to back triples as part of an 8:1 stretch, regaining the advantage, 63:67.

With 1:33 left on the game clock, Maccabi responded with a late surge stopping the hosts scoreless with a lot of fighting spirit. Dorsey and Wilbekin hit from the free-throw line, and Wilbekin dished an alley hoop pass to Hunter, who slammed it home and drew a foul on the play. After missing the bonus, Barcelona went to one last ball with Higgins. Hunter played the guard well on the defensive end, who tried to shoot a triple over him but without success. Maccabi beats Barcelona 68:67 in the Palau Blaugrana.