The Israeli champions return to the domestic competition facing the city rivals for the third time this season. Dorsey, Bender, and Caloiaro won't dress up for the contest

Maccabi Playtika Tel Aviv's quest to their 55th Israeli League championship resumes on Sunday as they host Hapoel Tel Aviv (21:00, Live on Sport5 - Channel 55) in Menora Mivtachim Arena. The Yellow & Blue look to win their third game against the Tel Avivian Reds this season after eliminating Hapoel in the State Cup and dominating them in the last matchup 85:69 behind a masterful 23 point performance by Wilbekin.

Maccabi comes into the contest ranked first in the Israeli Winner Leagues standing with a 13:3 record. On the other end, since the last time they met in late January, Hapoel made changes at their coaching position, bringing Danny Franco to replace Giannis Kastritsis. The Reds rank 11th in the domestic league, winning only three while dropping 10. Yam Madar leads the team with 16 points per game this season.

The Israeli champions struggled at times, but Jones's season-high 26 point performance awarded the hosts their third derby win of the season. Thursday: at Panathinaikos

Maccabi Playtika Tel Aviv continues to dominate the Tel Aviv Derby beating Hapoel in the third matchup between the two sides, 80:77. Giannis Sfairopoulos's squad erased a 16 point deficit thanks to an incredible performance by Chris Jones, who finished with a season-high 26 points and 5 assists, improving Maccabi's Israeli Winner League record to 14:3 on the season.

Omri Casspi led the Yellow & Blue's in the first half finishing the night with 6 points and 7 rebounds. John DiBartolomeo (4 assists), Scottie Wilbekin (10 points), Oz Blayzer (great energy), and Othello Hunter (9 points, 8 rebounds) ignited the comeback midway through the third quarter and completed it in the final minutes of the fourth quarter. Maccabi's next challenge comes on Thursday as they head out to Athens to face Oded Katash's Panathinaikos.

Madar opened the contest with a successful shot from behind the arc. On the other end, Wilbekin read a pass, stole the ball, and dished a full-court quarterback pass to Casspi, who slammed down easy two points. Zizic and C.Jones each contributed 4 points in the paint as Madar totaled 5 midway through the quarter, 12:11.

The Yellow & Blue offense cooled off, tallying only two points from the free-throw line in the final 5 minutes of the quarter as the visitors took advantage, with Madar leading the way scoring 4 of the 9:2 stretch 14:20 after 10 minutes.

The Reds added to the margin seizing a double-digit advantage as Jon Diebler and Timor knocked down three-pointers, completing 12 unanswered points, 14:28. After 4 minutes, Casspi, with back-to-back buckets in the paint, shifted the momentum and ignited a 12:2 run as Wilbekin's five points cut the edge down to 2.

Timor converted a three-point possession, and Jonathan Mor drilled a corner three, but Wilbekin responded on the other end with a deep triple settling the score on 35:42 at halftime.

The second half opened with a 9:0 Hapoel blitz as Apshow totaled six straight points in the point, 35:51. Oz Blayzer sparked a 13:0 run with incredible energy and efficient minutes on both ends of the court, including a shot from deep, as Jones converted two straight three-point plays, 50:53. 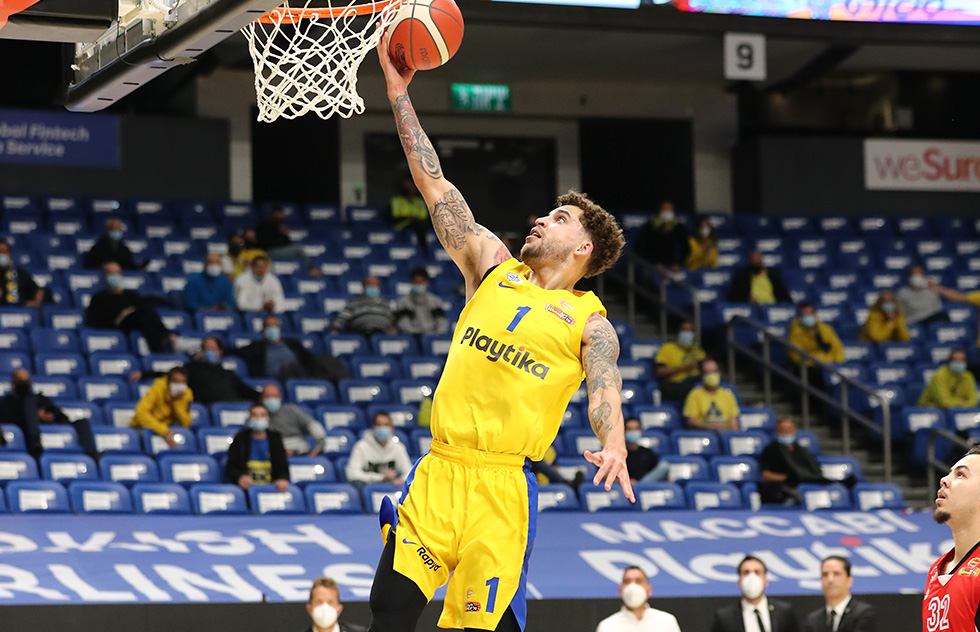 DiBartolomeo stole the ball from the visitors, dished an assist to Cohen, who drew a foul and laid in two for a three-point. The Yellow & Blue captain completed the comeback with a triple, but Mor totaled in his 9th point of the night, regaining the edge heading to the fourth quarter, 57:59.

DiBartolomeo dished an alley-oop pass to Hunter, who slammed it down, and Jones knocked down multiple mid-range jumpers, but a T.Jones dunk and a Madar three-pointer kept a minimal Red edge, 63:64. T.Jones four straight putback points increased the margin back to 7, but Jones and Hunter converted from the charity strike, reduced the score down to 3.

The hosts swapped the lead to their side in the final minutes as Hunter spun his defender move and slammed it down over Mor, and Jones totaled his 24th point of the night, pulling up back-to-back times from mid-range and hitting twice from the free-throw line, giving Maccabi a 78:75 edge with 23 seconds left on the game clock.

Madar converted twice from the charity strike, but the Yellow & Blue player of the night, Jones, handled the pressure and hit both shots from the line. Maccabi wins their third Tel Avivian derby of the season with an 80:77 victory over Hapoel.