The Yellow & Blue close out the regular season seeking their fifth consecutive win and a perfect record in the top division. Bender, Alber, and Atias won't dress up for the contest

Maccabi Playtika Tel Aviv will head out on Monday to the capital for their last game of the regular season, facing Hapoel Jerusalem (21:00, Live on Sport5 - Channel 55) in the Pais Arena. The Yellow & Blue squad has already secured the number one seed but is still waiting for their Quarter-Finals opponent, while on the other end, the Reds still don't know their final seeding as a loss will drop them down to the sixth spot.

Maccabi dominated Jerusalem in the previous two meetings between the sides: 100:76 at the Pais Arena and 101:80 at Menora Mivtachim Arena.

The game was delayed by 45 minutes due to complications issues in the 24-second clock. After the long wait, Maccabi started off slow but still went down to the break with a slim 2 point advantage. Similar to the last two victories, Giannis Sfairopoulos's unit came out determined and much more focused in the first minutes of the second half, going on a 17:4 run. Still, Jerusalem narrowed the gap down to 6 by the end of the quarter and stayed close until the final seconds, which gave them a chance for Ariel's last-second winning shot. 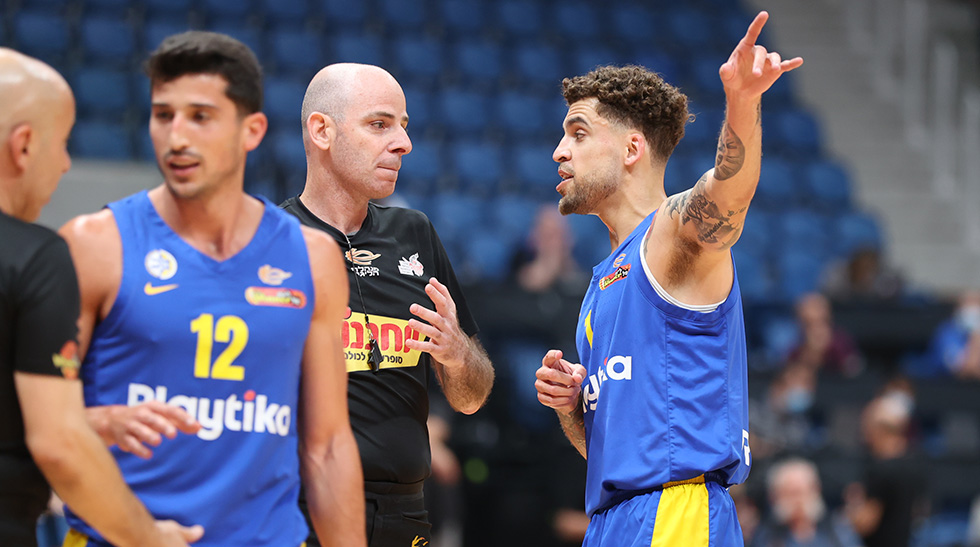 Back-to-back steals by Casspi and Caloiaro led to easy points on the other end, Blatt put the hosts on the board with a three-pointer and added two consecutive assists to Zalmanson and Braimoh inside, 4:7. Maccabi answered with 8 unanswered points as Zizic scored 4 inside, and Caloiaro sealed it with a shot from behind the arc, regaining the edge, 14:9.

Wilbekin hit two shots from behind the arc, while on the other end, Adam Ariel answered with a three of his own as Blatt and Julian Boyd knocked down mid-range jumpers. Chris Jones took the final shot of the quarter and drilled it from the top of the key, giving the visitors a 24:21 advantage after 10 minutes.

The Reds' chased the Yellow & Blue reducing the lead to 1, after Blatt shot in both free-throws and added an assist to Braimoh, who converted a three-point possession. Wilbekin buried a triple, but Zalmanson tipped in two, closing a tight first half at 43:41.

Maccabi came sharp out of the break as Casspi found an open lane for an easy two-handed finish, Oz Blayzer and Wilbekin drilled shots from behind the arc, and two steals and finishes by Casspi and Zoosman, gave the visitors their first double-digit margin of the night, 57:45. Wilbekin completed a 17:4 stretch with another three, Boyd and Blatt responded with shots from deep, and the Israeli guard added two more, lessening the lead down to 11, 64:53.

Zalmanson scored four straight points in the paint, and Ariel knocked down a triple reducing the Yellow & Blue advantage to 6 heading into the final quarter, 67:61.

Jerusalem's momentum extended in the fourth as Kremer and Blatt connected from deep while a Hunter alley-oop finish kept the visitors with a minimal margin, 71:67. Ariel's back-to-back three-pointers gave the hosts their first lead since the first half, but Caloiaro and Wilbekin who started a stretch of 9 straight points to finish the game, converted from the free-throw line tying the contest at 75 midway through the quarter.

Wilbekin and Braimoh exchanged buckets keeping it tied at 79 with 40 seconds left. The American guard took responsibility and buried a big shot from deep with 23. After the play, he received a technical foul in which Braimoh converted from the charity strike, 82:80 with 24 seconds left to the final buzzer.

Ariel tried to win the game but missed from the outside, as the ball rolled out of bounds leaving Jerusalem with 0.7 seconds left. Ariel got another chance and, this time, drained a dramatic triple on the buzzer, giving Jerusalem an 83:82 win over Maccabi.