Holding a 1:0 series lead over Rami Hadar's group, the Yellow & Blue head down south to the Negev capital with an intent to close out the series, clinching a ticket to the Semifinals

Maccabi Playtika Tel Aviv looks to make another step towards lifting its 55 championship plate. On Wednesday, Giannis Sfairopoulos's squad will face Hapoel Be'er Sheva in the Conch Arena (17:30, Live on Sport5 - Channel 55), aiming to grab the win, sweep the series and clinch a spot in the Israeli Winner League Semifinals.

After the Yellow & Blue received terrible news from the direction of Dragan Bender, who apparently tore his ACL after leaving the game in the first quarter, Giannis Sfairopoulos's squad decided to register Yonatan Atias. The latter will join Ante Zizic and T.J Cline as the big men while the team isn't allowed to register Othello Hunter for the rest of the series due to administrative rules. 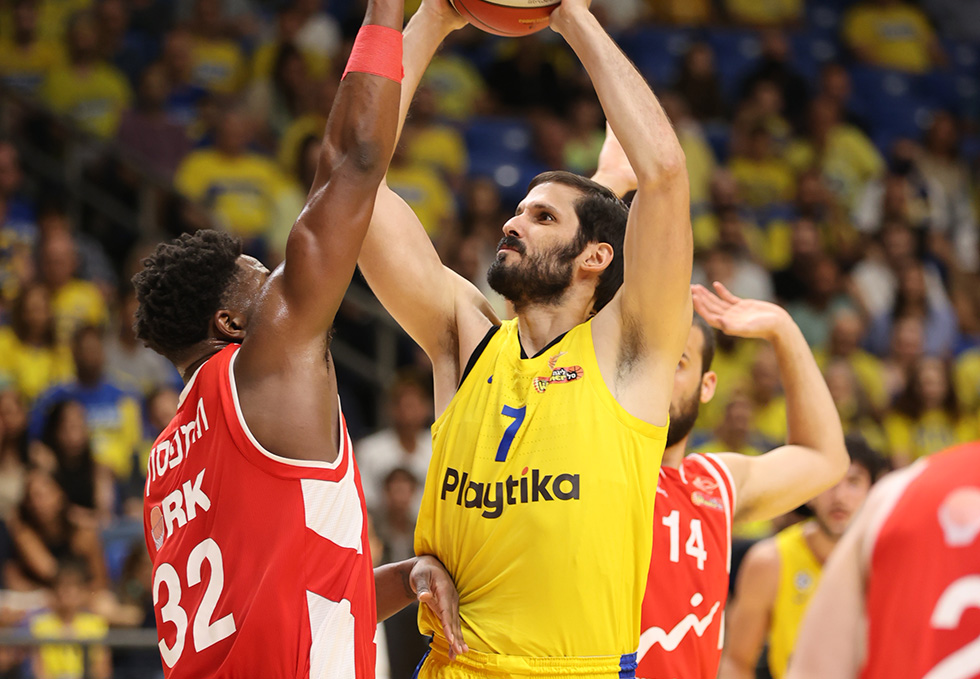 With that, the 12 with whom Maccabi will attempt to sweep the series and qualify for the semifinals are Scottie Wilbekin, T.J Cline, Chris Jones, Angelo Caloiaro, Sandy Cohen, Omri Casspi, John DiBartolomeo, Oz Blayzer, Dori Sahar, Ante Zizic, Yonatan Atias, and Yovel Zoosman.

The last time Maccabi was at the Negev capital was just over a month ago in the 26th fixture of the Israeli Winner League. Back then, the Yellow & Blue lost to Rami Hadar's unit 79:93 behind a 43 point performance from Caleb Agada, who since then left the country due to the security situation that occurred last month.

The reigning Israeli champions secured their spot in the Final 4 after fighting their way to a 93:92 victory in the Negev capital. Caloiaro led the scorers with 18 points. Sunday: Hosting Hapoel Eilat or Hapoel Haifa

Wilbekin scored Maccabi's first 5 points of the night while Bell responded with 4 for the Reds. A Zizic steal on the defensive end led to a Blayzer slam which initiated a 9:0 run as Caloiaro and Zizic converted shots from the free-throw line giving the visitors a double-digit advantage, 14:4.

After Bell stopped the stretch, Caloiaro drove to the bucket and slammed it down with the left hand, and T.J Cline came off the bench and completed a three-point possession, 19:8. Weisz and Netta Segal hit back-to-back triples to reduce the lead, but Wilbekin had the final say in the quarter after drilling a fadeaway mid-range jumper, closing out the first 10 minutes of the game with a 21:14 advantage.

The Reds grabbed the momentum early in the second quarter as Thompson 4 points inside and Warech's five led a 9:2 stretch tying the game at 23. Weisz gave the hosts the edge after drilling a three-point shot, but Chris Jones beat the 24-second shot clock with a mid-range jumper to reclaim the lead, and Zizic scored 7 straight points as 5 of them came in one possession after an unsportsmanlike foul didn't stop the Croatian big man from sinking two, 34:28. 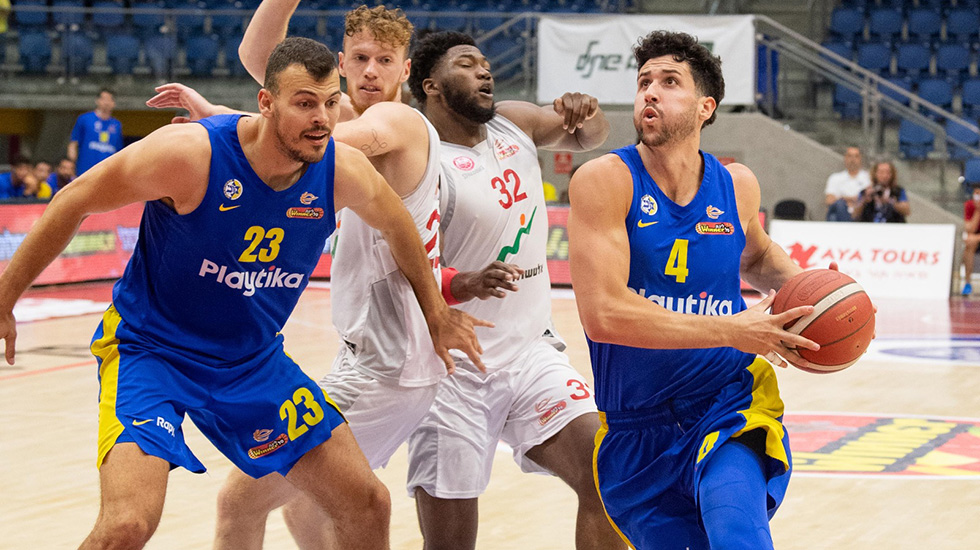 Once again, Jones drained a three-pointer just before the 24-second buzzer, but Beer Sheva received second chances after attacking the offensive boards as Bell and Thompson tied the game at 37. Wilbekin reached double-digit points after knocking down a shot from deep and dished an assist to Zoosman, who finished a fastbreak with a right-handed slam, 42:37 at halftime.

Bell and Caloiaro exchanged buckets as Wilbekin followed with a basket and an assist to Zoosman, 49:41. Caloiaro's five consecutive points, including a fastbreak dunk, ramped the margin back to double digits. Bell converted a three-point possession after Zizic fouled him, and Warech drained a shot from behind the arc, reducing the edge down to 6, 56:50.

Weisz connected in all three free throws, and Nick Hornsby scored 4 straight points, but on the other end, Zoosman laid in two, and Blayzer drained back-to-back triples from the same tile giving Maccabi a 9 point margin going into the final 10 minutes, 71:62. 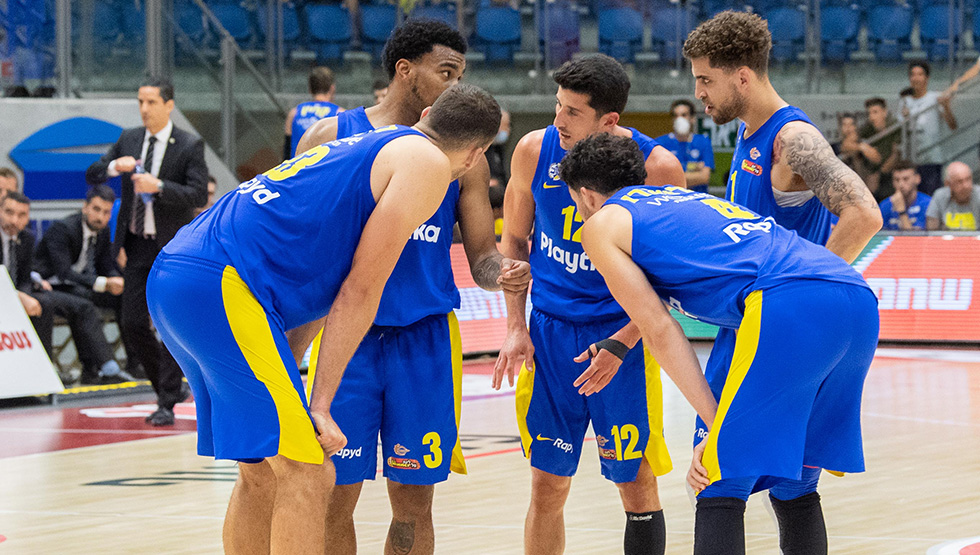 Suss opened the quarter with 5 straight points reducing the score down to 4, yet Casspi worked his defenders in the post and dished three assists to Cline, who responded with three easy buckets for 7 consecutive points, 78:71. Weisz brought the Reds a possession away after knocking down a three-pointer, but John DiBartolomeo found a lane to lay in two and dished an assist to Caloiaro, who later scored two from the charity strike after an unsportsmanlike foul by Suss, 83:77.

Bell drained a shot from behind the arc that made Sfairopoulos call a timeout in which Maccabi came out well as a Caloiaro steal led to a Zizic layup that kept the lead at 6, 91:85. Rami Hadar's group didn't say their final words as Hornsby scored off of second-chance points after back-to-back offensive board, shrinking the margin down to 2 with 11 seconds left.

DiBartolomeo was sent to the free-throw line and hit both twice, gaining a 4 point edge. Segal drained a triple from outside in the final second, but that was too late. Maccabi sweeps the series and advances to the Israeli Winner League Semifinals after a hard-fought 93:92 victory over Hapoel Be'er Sheva.