The reigning Israel Champions are two wins away from defending their fourth consecutive title as they begin the Finals series at Menora Mivtachim Arena. Wilbekin: "It's been a long year, probably the longest of my career, and we just want to finish it with the title"

Maccabi Playtika Tel Aviv reached the decisive moment of the 2020/21 Israeli Winner League as they'll host Hapoel Gilboa/Galil (21:00, Live on Sport5 - Channel 55) in Menora Mivtachim Arena on Monday night for Game 1 of the Finals series. The Yellow & Blue need two more wins in the best of three series to complete their season goals of winning their fourth consecutive championship, their 55th in total, closing out a long and exhausting season winning all three domestic titles.

Coming into the contest sweeping their way into the finals, Giannis Sfairopoulos's squad has a tough assignment facing Avishai Gordon's unit, whose given Maccabi problems throughout the season. The Reds came on top in the first two matchups during the regular season, while in the top division, Maccabi beat Gilboa/Galil 67:65 thanks to a 23 point performance by Scottie Wilbekin. Throughout history, the Yellow & Blue hold a clear advantage in playoff play defeating the northern squad in 19 of the 24 contests.

Hapoel Gilboa/Galil enters the Finals after completing a 2:0 sweep over Hapoel Holon in the Semifinals. Their most significant contribution comes from their big-man Kerry Blackshear, who's averaging 18.8 points, 7.3 rebounds for a total of 24.3 PIR. Yiftach Ziv is Gordon's main Israeli leading the northern squad, scoring 12.3 points while dishing 4.5 assists per game. 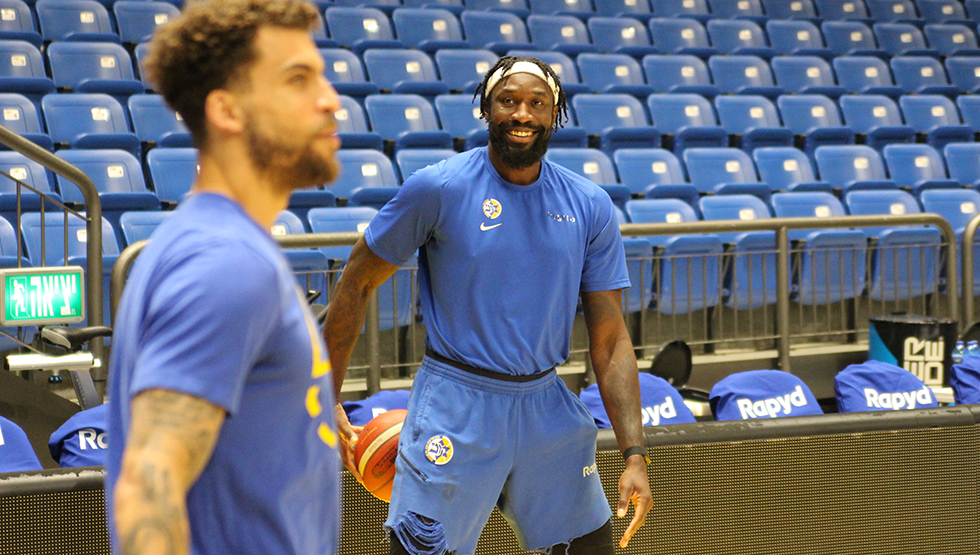 "We started preparing for the Finals series these past couple of days taking advantage to work on small details on both sides of the court. Gilboa/Galil is a very good team, showing that in the other semifinal series", Said head coach Giannis Sfairopoulos in the final practice. "We need to stay focused on executing our game plan and fight for every possession".

"It was a long season, but now we don't think about it. We are determined to accomplish our goal, and that is to play as best as we can in Game 1, not thinking about the rest of the series. We spoke about how we should approach the game mentally and what we have to do".

The Greek coach spoke about the 6 days rest between games: "From my experience, sometimes, when you play back-to-back games all season and wait so long for your next series, it makes you sleepy, and you lose your rhythm. We worked really well to stay in sync, and I believe we will be ready for Game 1".

Scottie Wilbekin added towards the final games of the season: "It's been a long year, probably the longest of my career, and we just want to finish it with the title. Some say it's good to have rest, and some say to have a rhythm. We will see it in Game 1. We have to do a good job sticking to our game plan on defense, knowing we have to get back on transition and limit Gilboa/Galil's scorers. They are definitely a good team, they have a lot of good players, so it's going to be a tough matchup for us".

"So far in the playoffs, we've done a good job being pretty balanced, getting good shots as a team, and although my shots haven't been falling lately, I'll keep taking them", Told the guard about the team's success, despite losing key players in the late part of the season. "We've had some off nights offensively, but we've been making them up defensively, so hopefully, it will all come together this series".

Maccabi grabs a 1:0 series lead after an 83:74 win over Gilboa/Galil

The Yellow & Blue were dominant throughout the contest thanks to great performances by Caloiaro and Wilbekin. Giannis Sfairopoulos squad are now one win away from lifting the championship as they'll try to complete the task on Wednesday in Gan Ner

Maccabi Playtika Tel Aviv made one more step towards securing their fourth consecutive Israeli Winner League championship, surpassing past Hapoel Gilboa/Galil 83:74 on Monday evening in Game 1 in the best of 3 series. In front of a sold-out crowd in Menora Mivtachim Arena, Giannis Sfairopoulos's squad were the more focused and aggressive from the tip-off, holding a comfortable margin for most minutes of the contests.

Scottie Wilbekin led the Yellow & Blue with 24 points, and Angelo Caloiaro contributed 16 points (12 of them coming from behind the arc). Ante Zizic was active in the paint, adding 11 points and 9 rebounds, John DiBartolomeo drilled three triples for 9 points as Omri Casspi ( 7 rebounds) and Chris Jones scored 8 points each.

On Wednesday, Maccabi will head out to Gan Ner for Game 2 of the Israeli Winner League Finals series with a chance to close out the season with the clubs' 55th championship title. However, in case of a loss, the teams will return to Menora Mivtachim Arena 24 hours later for a decisive game 3. 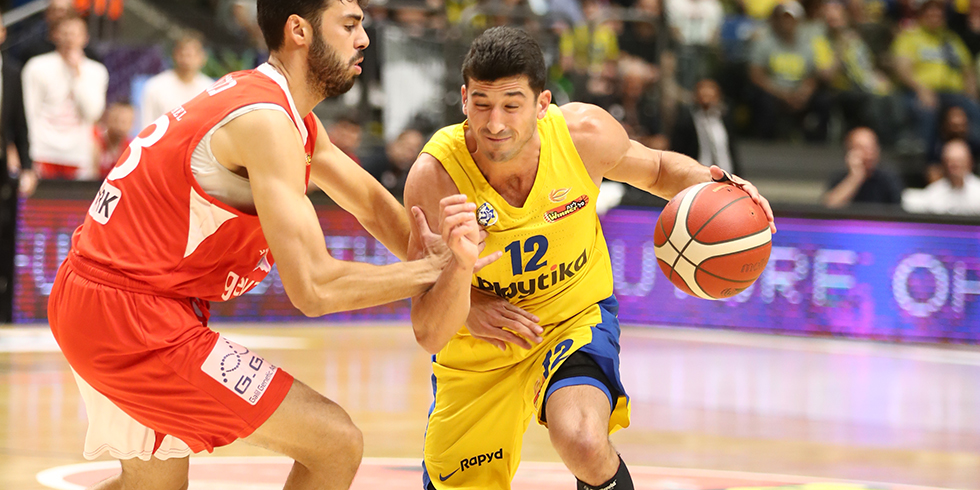 Zizic tipped in two off an offensive board as Wilbekin drilled a shot from deep and floated in two high off the board over Artzi for a quick 7:0 start. Floyd laid in back-to-back buckets for the northern's first points of the Finals, but Caloario answered twice from deep, and Casspi added two from the free-throw line, opening a double-digit advantage, 15:4.

The visitors scored 7 unanswered points as Ziv and Blackshear scored inside, cutting the margin down to 4. Caloiaro connected for his third triple of the quarter as Thomasson and Benaya Srur closed out the first ten minutes, 21:15.

John DiBartolomeo drilled two shots from behind the arc, and Othello Hunter grabbed three straight offensive boards finishing strong around the rim, ramping the margin back to double digits, 31:20. Arzi floated in two off an outlet pass, and Ziv found Floyd for an alley-oop finish. On the other end, Wilbekin drilled a mid-range jumper, Casspi tipped in two off an offensive rebound, and Caloiaro added another three-pointer, 40:28.

Chris Jones beat the 24-second shot clock with a deep two, but Isaiah Cousins led the Reds to a late run connecting from three, adding a pull-up jumper as Thomasson closed the half with Gilboa/Galil's third triple, 42:36.

The Yellow & Blue defense stopped the northern squad scoreless for the first three and a half minutes as Wilbekin and Zoosman converted from the free-throw line. Floyd responded with a ferocious left-handed slam as both offensive sides got it going, with Wilbekin and Caloiaro for Maccabi opposed by Ziv and Artzi, 52:45. 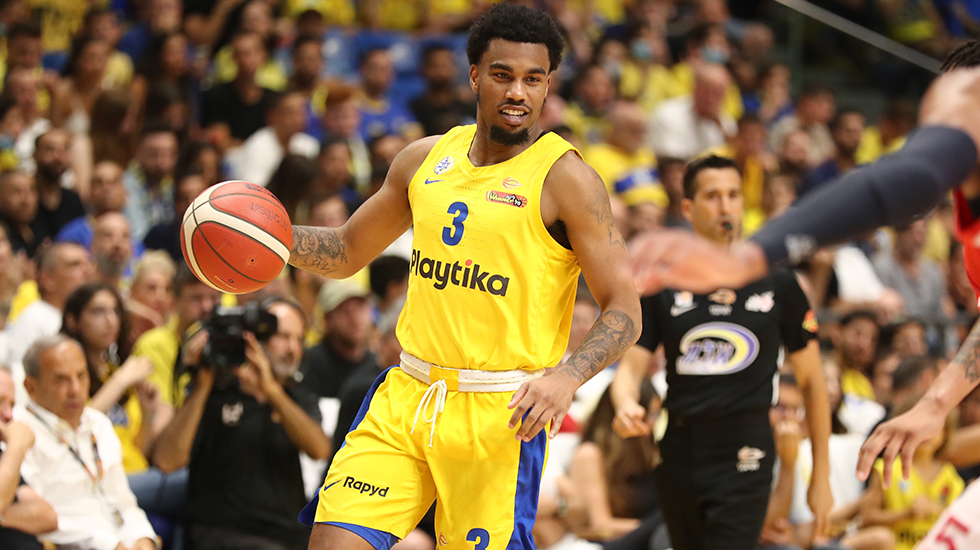 Casspi swished a triple after a Zoosman offensive rebound, and Jones passed by his defender, laying in two beautiful points leading to an Avishai Gordon timeout and a double-digit margin. Gil Benny knocked down a corner three, and Blackshear laid in two, reducing the edge down to 7 heading into the final quarter, 57:50.

Wilbekin scored four points in the paint, DiBartolomeo hit his third triple of the night, and Zizic converted from the charity strike, increasing the margin up to 14. However, the Reds didn't say their last word going on a 7:0 run as Floyd tipped in a bucket after a Blackshear miss, Ziv laid in two as he was fouled, completing a three-point possession, and later dished an assist to Floyd, who finished near to the rim, 66:59.

Wilbekin continued his excellent quarter scoring 7 consecutive points for the hosts, passing by his defender, finding an open lane to the basket for an easy layup, and next possession, the American guard, knocked down a typical three-pointer regaining a double-digit lead. Zoosman drove to the basket on the baseline, laid in two, and found Zizic, who sealed the deal with an easy bucket. Maccabi gains a 1:0 series lead after an 83:74 win over Gilboa/Galil.