Maccabi drops to Gilboa 76:81, heading to a deciding Game 3 on Thursday

The Yellow & Blue erased a 16 point deficit but couldn't complete the comeback despite a 34 point performance by Scottie Wilbekin. The championship will be decided on Thursday (21:00)in a decisive Game 3

Maccabi Playtika Tel Aviv lost in Game 2 to Hapoel Gilboa/Galil 76:81 in Gan Ner, evening the Israeli Winner League Finals Series to 1:1. A remarkable 34 point performance by Scottie Wilbekin helped erase a 16-point hole, but the visitors didn't have the ultimate firepower to bring the championship plate back to Tel Aviv. As a result, Giannis Sfairopoulos's squad will head back home on Thursday (21:00, Live on Sport5 - Channel 55) to a sold-out Menora Mivtachim Arena for a decisive Game 3 to determine the 2020/21 Israeli champions.

Maccabi didn't open the game well but managed slowly to minimize the gap thanks to second-chance points (22 offensive boards) and a great shooting night from behind the arc (45%). Other than Wilbekin's showing, Chris Jones was the only other player in the Yellow & Blue jersey that scored in double digits, contributing 14 points alongside 5 assists.

The start was all Red as a Ziv steal led to a dunk on the other end, and a Blackshear mid-range jumper made Sfairopoulos call an early timeout, 0:6. Zizic slammed in the visitors' first points of the night, but Artzi and Ziv, in transition, knocked down successful shots from behind the arc, gave Avishai Gordon's squad a double-digit advantage, 4:16.

Chris Jones came off the bench and immediately executed a three-point play, but Thomasson drilled back-to-back triples, ramping the margin to 16. Wilbekin converted three free throws as T.J Cline and Jones hit from deep, 16:30 after 10 minutes.

Both teams exchanged three-pointers as Wilbekin and Jones got it going for the Yellow & Blue while Blackshear and Yotam Hanochi answered on the other end, 25:38. The triples kept on dropping as John DiBartolomeo reduced the edge to 10, but Ziv and Blackshear continued the tear from deep, regaining a 16 point margin, 30:46. Wilbekin scored Maccabi's last 10 points of the quarter and a total of 16 in the quarter, including a tough basket with the left hand, 40:51 at the break. 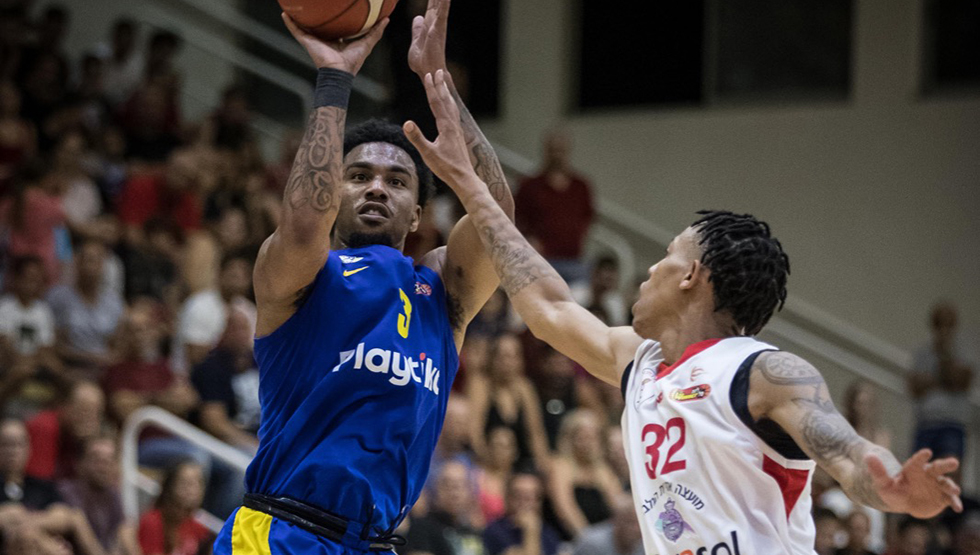 Wilbekin kept on dealing, scoring the first five points of the quarter, leading Maccabi to a quick 7:0 run, diminishing the margin down to 4. Floyd finished the run with an alley-oop finish, but Zizic answered with a beautiful follow-up dunk, 49:53.

Then, Gilboa/Galil stopped the Yellow & Blue offensive flow as Blackshear, and Isiah Cousins from mid-range took advantage for 8 consecutive points, regaining a double-digit margin. DiBartolomeo noticed a lane, drove to the basket for a layup, and, late in the quarter, knocked down a triple off a Jones assist, setting the score at 54:64.

The fourth quarter started with a Floyd block and tough hook shots by Blackshear, but Jones and Wilbekin, with two tough triples, reduced the deficit to single digits, 63:69. After a Floyd slam, the visitors went on a 7:0 stretch as the highlight came from a Caloiaro hit a three-pointer after a crucial offensive board by Hunter, 70:71.

Floyd converted a three-point possession after a hard one-handed slam, but the Yellow & Blue tied the game for the first time since it started as a Wilbekin steal led to a Jones layup, and later Wilbekin drilled two from the charity strike, tying the contest at 74.

Thomasson hit a clutch three, and Ziv knocked down a tough mid-range jumper on the verge of the shot clock giving Gilboa/Galil a 3 point edge with 22 seconds left. Ziv blocked a Wilbekin three-point attempt, the ball stayed in Maccabi's hands, earning another chance with 15.7 seconds left, but Wilbekin lost the handles, and Thomasson ran the clock, sealing the deal. Gilboa/Galil beats Maccabi 81:76.