The Israeli Double winners meet the team they already beat this season in the league cup (20:15 Israel time). Sfairopoulos: "Players who didn't play needs to be ready"

Maccabi Playtika Tel Aviv amassed its second consecutive EuroLeague win and improved to 3:2 in continental play. Now it's time to get back to the Israeli league. On Saturday evening, the Israeli Double winners plays hosts to Hapoel Jerusalem as part of the third round of the regular season (20:15 Israel time, live on winnerleague.tv).

Maccabi has already beat the capital squad this young season, with a 81:65 performance in the League Cup semis, en route to the first title of the season. Jalen Reynolds lead the Yellows' scorers then with 22 points, while Scottie Wilbekin and James Nunnally pitched in with 15 a piece. Sean Kilpatrick was the rivals' top scorer with 16. 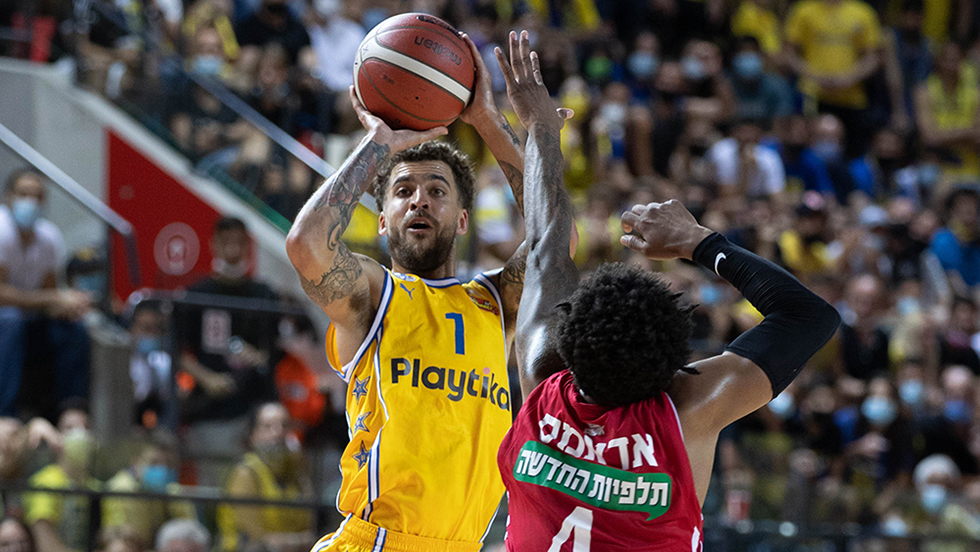 On Thursday night in the EuroLeague, Macccabi enjoyed a full squad for the first time this season, and snagged a 77:73 victory over Panathinaikos. Giannis Sfairopoulos welcomed Ante Zizic back after a month-long absence, and the Croat looked good in his return. "We have a long road, almost 80 games, and everyone needs to be ready", said the Greek coach after beating his compatriots. "Those players who didn't play needs to be prepared".

After a win over Hapoel Haifa and a loss to Gilboa-Galil, the Maccabees have a 1:1 record in local play coming into Saturday. On the other hand, Jerusalem holds a 2:0 record thanks to wins over Galil Elyon and Be'er Sheva, though the reds did lose their two bouts in the FIBA Champions League.

For Scottie Wilbekin, facing Jerusalem is like waving a red flag at a bull. Since joining Maccabi in 2018, the guard has improved in each season in games versus Jerusalem, posting 23 points and 5.2 assists per game in 10 league games.

A yellow celebration at Menora-Mivtachim Arena: The champs looked great and defeated their big domestic rival 104:80. Wilbekin led the scorers with 18 points

Showtime at Menora-Mivtachim Arena: Maccabi Playtika Tel Aviv faced its biggest domestic rival and provided a statement with an emphatic 104:80 win over Hapoel Jerusalem in front of 8,000 fans.

The Israelis had a considerable contribution as well. Oz Blazer provided 14 points, while Roman Sorkin maintained his excellent form with 14 of his own.

On Tuesday, Maccabi will play again at home, against Zalgiris Kaunas that still haven't won this season in the Euroleague.