Maccabi Loses to Malaga, is Ranked Third in the Draw

Maccabi Electra Tel Aviv got off to a bad start in the opening minutes of Thursday night’s game and never managed to get close. Final score: Malaga 92, Maccabi 69. 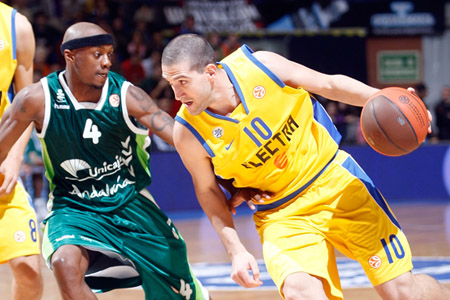 Maccabi Electra Tel Aviv finished the Euroleague regular season in third place in Group A, after a loss to in , 92 – 69.
D’or Fischer was the only Maccabi player to perform at his level of ability, and finished with 19 index points.
The draw for the Top 16 match-ups will take place on Monday, January 19 in at CET (live coverage on the Euroleague website).

Maccabi tried to open aggressively at the start of the game, especially in the paint, but were slow setting up on defense, and the hosts were able to fire off four quick three-pointers and establish a lead that wouldn’t shrink much for the remainder of the game.
After four minutes of play, the score was 13 – 2, .
Maccabi head coach Pini Gershon responded by calling a time-out, then putting Tre Simmons and Lior Eliyahu into the game.
Neither action had much effect, and continued to walk all over Maccabi, 17 – 4 with four minutes left in the period.
played with great confidence, while Maccabi looked weak and disorganized, finally managing to score their first field shot with two and a half minutes left in the first quarter.
Points by Arroyo and Fischer wrapped up the period with the score 27 – 14.

Maccabi continued having trouble getting the ball in the hole in the second quarter, while continued to look strong.
Two nice assists to Casspi from Eliyahu and a basket by the latter showed a glimpse of the real Maccabi, and closed the gap to 34 – 23, four and a half minutes into the period.
Maccabi took advantage of mistakes by on offense and continued whittling away at their deficit.
A great performance by Marcus Fizer, including an assist to Casspi, brought Maccabi within 8, 39 – 31 with three minutes left in the half.
In the last possession of the half, Arroyo scored from outside the arc, keeping the score relatively close at the halftime break, 45 – 36.

Thanks to points by Eliyahu and Brown, Maccabi stayed close to in the opening minutes of the third quarter.
Then the Spaniards broke away and set the score at 56 – three-pointers by Cook three minutes into the second half.
Skillful playing by Fischer on both defense and offense helped Maccabi pull within ten, but Maccabi’s momentum again dried up and Malaga pumped their lead back up to 62 – 47 with three and a half remaining in the period.
Maccabi was unable to get organized on offense against the strong defense of their hosts, while continued to score at will.
The quarter ended with enjoying a comfortable lead, 70 – 55.

The fourth quarter was a continuation of the third, with ’s lead over Maccabi continuing to grow.
Maccabi barely seemed present in the game, while the Spaniards started celebrating on the sidelines as the score swelled to 78 – minutes of play in the final period. A few failed attempts by Arroyo to save the game single-handedly saw him benched by Gershon.
Points by Fischer and a three-pointer from out of nowhere by Simmons closed the gap slightly, 80 – 64 with three and a half minutes left in the game.

That was the closest Maccabi would get for the remainder of the game.
continued to dominate, and the game ended with the score 92 – 69, .

After the game, Yaniv Green said, “We looked tired.
played great; everything went their way and they deserved to win.
There are days when nothing comes together, and this was one of them for us.
We need to remember that the season isn’t over yet.
We’ll wait for the Top 16 draw, and we’ll do the maximum there.”

Maccabi Electra Tel Aviv head coach Pini Gershon tried to explain what happened in the game.
“It was one of those evenings where, from the beginning we should have been thinking how we could get back into the game.
There are no excuses.
played very well, they deserve the win, and I wish them luck in the next round.”

“I don’t know how to explain what happened to us,” said Maccabi forward Lior Eliyahu after the game.
“The first quarter basically decided the game.
It was really hard for us to come back from that, even though we did build up some momentum here and there.
We did not play at our true level of ability.”

“ opened the game like a whirlwind,” explained Omri Casspi.
He added, “It was a really hard away game.
They opened really well and put pressure on us.
They got away from us, and though we tried to close in on them, we just weren’t able to do it.”

Casspi went on, “I don’t know how to explain it.
They scored like crazy, making the long shots.
We prepared well for this game, we weren’t overly relaxed.
We didn’t play well as a team; it happens.
Olympiacos also lost.”