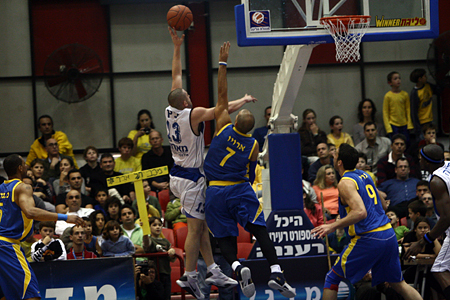 The triumvirate of Green-Casspi-Eliyahu took command in the early minutes of the game, taking Maccabi to an 8 – 3 lead three and a half minutes into the first quarter.
They swept their teammates along on a wave of forceful confidence, and a basket scored by Eliyahu over the head of Katz brought the score to 14 – 5, Maccabi, causing the home team’s coach to call for a time out.
Bnei Hasharon came out of the break with a bit more focus, but still couldn’t stop the excellent play of Eliyahu, who brought the score to 18 – 9 with two and a half minutes left in the quarter.
Tapiro woke up enough to start bringing his team back into the game, but a three-pointer by Casspi and an emphatic block by Green closed out the quarter with Maccabi leading, 23 – 16.

Maccabi maintained their lead in the second quarter.
Elton Brown put in his first minutes of play in the Maccabi blues, and together with Arroyo, who started finding the basket, brought the score to 30 – minutes of play in the quarter.
Either the comfortable lead relaxed the team too much, or substitutions by head coach Pini Gershon broke up the momentum, but Maccabi slowed down their game, and Bnei Hasharon were able to pull within three points of the visitors, 36 – 33 with two minutes left in the half.
Points by Jason Williams and Green bought Maccabi some breathing room, but a Hail Mary shot from half-court by Tapiro found the basket, and the teams went into the break with the score 40 – 37, Maccabi.

Bnei Sharon built on the momentum created by Tapiro’s miracle shot from the end of the second quarter, and took the lead early in the third quarter.
Two straight shots from outside the arc by the hosts put the cap on an 8 – 0 scoring run, bringing the score to 51 – 45 Bnei Hasharon, four minutes into the period.
A time-out called by Gershon helped get Maccabi back into the game, closing the gap to two.
But Belcher took charge for the hosts, and almost single-handedly brought the score up to 58 – 51 with three minutes left in the quarter.
Maccabi’s response came from Arroyo, who took charge of the ball and set out to prove that he is the man to look to in clutch time.
The point guard scored 8 points in the closing minutes of the quarter, bringing Maccabi to a tie with their hosts, 61 all at the end of the period.

A three-pointer by Arroyo and a crucial basket by Eliyahu (who was by now tiring after spending most of the previous three quarters on the court) gave Maccabi an excellent start to the fourth quarter, giving Maccabi a 68 – 63 lead after three minutes of play.
The hosts came out of a time-out with renewed energy, but Maccabi kept the lead thanks to baskets by Williams and Eliyahu, and the score stood at 74 – 69 in favor of Maccabi with four minutes left in the game.
Maccabi went without scoring for several possessions, and saw their lead start to dwindle.
Fortunately, Maccabi has team captain Derrick Sharp, who scored a vital three-pointer with a minute and a half left in the game, bringing the score to 77 – 73.
Maccabi looked to be on the way to another victory, but a string of bad decisions on offense and defense enabled Bnei Hasharon to get back in the game.
The hosts tied the game, and then took the lead off a basket by Tapiro, 79 – 77 with thirty seconds remaining.
A free throw scored by Green brought Maccabi within one, but then Katz scored a three-pointer off the glass to give Bnei Hasharon a more comfortable four point lead.
In the end, there was nothing Maccabi could do to salvage the win, and they ended up with their second Premier League loss, 83 – 78 to Bnei Hasharon.

After the game, head coach Pini Gershon said, “The name of the game in excellence is stability.
Right now we’re in a tough patch, with four straight away games, but I can’t complain.
We need to nail down the things we’re missing, and to keep the players in good shape after all this traveling; you can see the effect it’s having, especially on the older players.”

“I have no complaints about my players.
We had only one practice, and that’s hard.
Tal (Burstein) has a sprained back, and other things you can see on the court are results of the traveling.
Long flights are not easy for basketball players with long legs.
Of course, that’s no excuse; the injuries are also not an excuse.
won an away game today by 25 points; for them it’s different.”

“Arroyo tried; he took charge of the ball and made the shots, and there aren’t many players who can do what he does.
You guys (the media) forget that Saras and Parker used to turn the ball over, too; you only remember the good things.
Arroyo was okay; he’s the only one who made a 180 turnaround from Thursday night’s game.”

Sidelined forward Marcus Fizer said, “We’re still trying to find ourselves.
Clearly, we really missed having D’or inside the paint tonight.
The players were tired; that happened last year, too.
I wouldn’t say we were fragile, but Bnei Hasharon was better than us.”

Winning coach Ariel Bet Halhami said, “We kept up the tradition.
No one gave us much of a chance before the game; the odds favored Maccabi to win by 13.
In the Israeli Cup games I’ve already beaten Maccabi, but this was the first time in the Winner League.
We’re going to enjoy this victory.
On Tuesday we have another game, so we’ll need to move on.”