In the third round of Euroleague Top 16 play, Maccabi Electra Tel Aviv lost to Real Madrid, 98 – 79. Arroyo was a standout with 21 points and 5 assists; Eliyahu added 20. 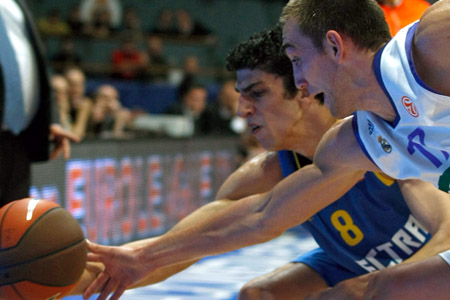 Maccabi had hoped to return from with a victory, but in spite of 25 good minutes for the Israelis, by the end of the game Real - thanks to Bullock and Llull – had broken away and ended up winning the game by a substantial margin.

Maccabi opened well with a dunk by Gaines, but the Spaniards responded with a quick 7 – 0 scoring run, bringing the score to 7 – minutes of play.
Maccabi got back into the game with help from Casspi, who dunked and scored a three-pointer to tie the game at nine, with four and a half minutes elapsed in the period.
Arroyo scored seven straight to give Maccabi the lead, 16 – 11.
The Spaniards slowly closed the gap, but a nice basket by Eliyahu kept Maccabi in the lead at the end of the quarter, 20 – 18.

Eliyahu continued to supply Maccabi with points at the start of the second quarter, and three straight baskets by the forward put Maccabi ahead, 26 – minutes.
Though successful on offense, Maccabi’s defense wasn’t enough to stop Real, who kept scoring basket after basket, keeping the game close.
Five minutes into the period the score was tied 28 all.
A third foul by Marcus Brown sent him to the bench, and a string of mistakes on offense by Maccabi saw the hosts break open a lead, 36 – 30, with two and a half minutes left in the half.
On top of everything else, Maccabi then lost Charles Gaines to a back injury, leaving the Israelis with a big gap in the center position.
Somehow Maccabi managed to stay close until a three-pointer by Axel Hervelle just before the buzzer sent the teams into the halftime break with leading, 42 – 36.

A three-pointer by Arroyo and free throws by Fischer kept Maccabi in the game at the start of the third quarter, and after three minutes the score remained close, 46 – 43.
took advantage of Maccabi’s poor defensive rebounding and lack of focus on offense, and increased their lead to 53 – 45 with three and a half minutes left in the period.
The Spaniards continued to gain momentum against the weak defense by Maccabi, and their lead continued to grow.
Only three-pointers by Fischer and team captain Derrick Sharp prevented the game from running away from Maccabi completely.
A basket by Eliyahu at the end of the quarter set the score at 70 – 61, .

Gaines re-entered the game at the start of the fourth quarter, and added some much-needed points for Maccabi, closing the gap to 73 – 65, two minutes into the final period.
Maccabi was able to put the brakes on Real’s momentum, but continued weakness on defensive rebounding made it impossible for Maccabi to get back into the game and the Spaniards maintained a double-digit lead, 79 – 69 with five minutes remaining.
Although Arroyo and Eliyahu continued to give their all, scoring shot after shot, Maccabi was helpless against the string of baskets from outside the arc scored by the hosts, who demolished all that Maccabi had managed to accomplish during the game.
A three-pointer by Llull set the score at 93 – 75 with a minute and a half remaining.
Maccabi struggled unsuccessfully to close the gap, and the game ended in a victory for Real Madrid, 98 – 79.

“Real deserved to win,” said Maccabi head coach Pini Gershon after the game.
“They played better than we did, and the difference between us was the three three-pointers by Llull.
He got the passes and made the shots.
Obviously, the next game against Real Madrid two weeks from now in Nokia Arena will be do or die.
It will be tough to come back, but not impossible.”

Team president Shimon Mizrahi said, “A game without Yaniv Green (who sat out the game with a back injury) and Charles Gaines, who didn’t play for much of the game, isn’t an easy one.
Good for him that he returned to the game in the fourth quarter. In the second half we scored seven three-pointers, the last four coming at critical moments.”
Mizrahi added, “The point difference doesn’t reflect our true abilities; anything is possible, and we aren’t about to give up.”

racked up their second consecutive win in the Euroleague Top 16, handing Alba their third loss in three games, 85 – 69.
In other games, Panathinaikos defeated 92 – 67, and Fenerbahce-Ulker defeated Cibona Zagreb in , 65 – 55.