Maccabi Loses to Ashkelon in Overtime 96 – 95

Maccabi Electra Tel Aviv lost in overtime to Ironi Ashkelon off a three-pointer at the buzzer by Trey Kelley, and is down 0 – 1 in the first playoff round series. 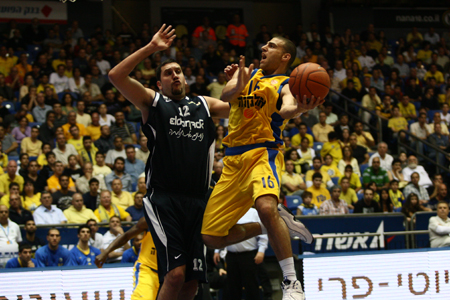 After finishing the regular season in first place, Maccabi Electra Tel Aviv got the playoffs off to a bad start with a home court loss (their first Israeli league loss at home this season), in overtime, to Ironi Ashkelon, 96 – 95.
A three-pointer by Tre Kelley gave the visitors the win at the buzzer.
Maccabi must win the next game between the two teams (Monday, May 4 in ) in order to maintain home court advantage.

Maccabi opened with Yaniv Green instead of Lior Eliyahu in the starting five, and looked disorganized, missing many shots in the opening minutes.
After two and a half minutes of play, led 4 – 2 after making a couple of easy baskets.
On defense, Green and D’or Fischer played well, keeping Maccabi in the game.
Two alley-oop passes ending in dunks by Fischer helped Maccabi take an 11 – 7 lead.
Green was called for two fouls and headed for the bench; in his absence Maccabi’s defense suffered, and retook the lead, 16 – 13 with a minute and a half left in the period.
Four points by Carlos Arroyo from the line and Fischer with another basket (8 points in the first quarter) helped put Maccabi back in front at the end of the quarter, 19 – 16.

The game stayed close at the start of the second quarter, and Maccabi couldn’t break their lead open.
Team captain Derrick Sharp and Raviv Limonad came into the game, but Maccabi’s offense didn’t get off the ground, and three minutes into the period Ashkelon once again took the lead off a three-pointer by Amit Tamir.
Omri Casspi racked up some points, and Limonad with four straight put Maccabi back up, 32 – 27 with four minutes until halftime.
Tre Kelley and Rashon Turner narrowed the gap for the visitors, 35 – 34 with remaining in the half.
A number of great plays by Limonad kept Maccabi on top going into the halftime break, 41 – 36.

The second half opened with 6 straight points by Maccabi and three straight scoreless minutes for Ashkelon, giving Maccabi their first double-digit lead, 47 – 36, after a three-pointer by Sharp.
Turnovers by Sharp and Marcus Brown gave Turner the opportunity to close the gap to 51 – 44 halfway through the period.
Two three-pointers by Sharp and Arroyo, plus additional points by Arroyo, returned the double-digit lead to Maccabi, 59 – 47.
Excellent plays by Green and a shot from outside the arc by Casspi put Maccabi up 67 – 54 at the end of the third period.

Missed shots and turnovers by Maccabi at the start of the fourth quarter allowed the visitors to come within nine, 67 – minutes of play.
couldn’t miss, and a three-pointer by CJ Bruton put the visitors within five, 69 – 64, and rounded out a 10 – 2 scoring run.
Maccabi came out strong after a time-out and despite another three-pointer from Bruton, Arroyo was able to lead the home team to a 77 – 67 lead with three minutes left in the period.

Once again the ball stopped dropping for Maccabi and an incredible three-pointer from Bruton and points by Turner put the visitors within three, 77 – 74 with a minute and a half remaining.
Fischer missed a shot under the basket and Bruton scored from the free throw line to make it 77 – 75.
Tyrone Grant grabbed the rebound off the missed second free throw, giving possession with one minute left.
Bruton scored over Sharp, tying the game at 77 all.
Two free throws by Arroyo put Maccabi up by 2 with 35 seconds on the clock, and head coach Robby Belinko called a time out.

With 18 seconds left, Fischer put Grant on the free throw line, where he promptly re-tied the game.
didn’t foul and Arroyo, who took it upon himself to score the final basket, ended up missing and the game went into overtime.

A minute and a half into the extra period, took the lead off a three-pointer by Turner and a basket by Avi Ben Chimol.
Those were answered by Casspi, who scored all of Maccabi’s early points in the overtime, and gave Maccabi back the lead, 85 – 84.
With two and a half minutes gone, Green fouled out and Eliyahu, who didn’t play at all in the second half, came into the game in his place.
Two pretty points by Arroyo put Maccabi up 89 – 86.
Immediately after that, Fischer committed his fourth foul, with left on the clock.
Turner only made one from the line and brought the score within 2, and a terrific block by Fischer on Grant prevented the visitors from tying.
A fantastic assist from Arroyo to Eliyahu put Maccabi up by four, but a three-pointer by Bruton with :50 remaining put the score at 91 – 90.

On the next possession, Bruton fouled out for and Brown scored two from the line, putting Maccabi up 93 – 90 with 47 seconds left.
Grant scored two from the line for the visitors, making it 93 – 92.
The visitors refrained from fouling Arroyo who scored, making it 95 – 92 with 10 seconds left on the clock.
Arroyo quickly fouled Kelley who made the first and missed the second.
After a struggle over the rebound, the ball went to with 2.8 left.
The inbounding pass went to Kelley, who scored a perfect three-pointer at the buzzer to give the win, 96 – 95.

“I knew it would be hard,” said Maccabi head coach Pini Gershon after the game.
“If we don’t know how to finish up a game like this one, then we deserve - or more appropriately, they deserve – the outcome.
It’s like I said before the game; they fought hard, and it was easier for them when they were down by twelve.
So we came to the end of the game with the score close, and anyone can make a mistake.
We’re going to try and make sure they don’t beat us again, but it won’t be easy.
Especially in the first half, we were too restrained; the problem was on offense, not defense.
We didn’t do things right, and when that happens you don’t know how to finish the game.
We’ve been in situations like that before this season, and we didn’t know how to finish the game.”

Tre Kelley said, “I told the guys that I could feel it.
We have a great team.
We wanted to stay close in the third quarter, and we did it.
It was my fifth game against Maccabi, and my first win – a big one.
I felt like I could make the shot, and it went in.
The next game is going to be a big one, and we have to win it.”

Robby Belinko described the atmosphere before the game.
“You (the media) focus on your own game and decide the results ahead of time, but we’ve come to work on the court.
We have great players.
We prepared and tried to learn the opponent as best we could.
Everyone expected us to lose 0 – 3 in the playoffs, and that helped us.
I told my guys that we would give the answer on the court.
What you saw tonight is not new to me.
Obviously, we’re going to need to bring the players back down to earth.”