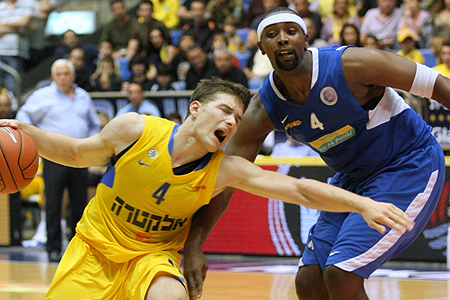 The visitors took an early lead, and after two minutes of play led 8 – 2.
Points by Green got Maccabi back in the game, but Nahariya kept on finding the net and at the halfway mark of the quarter led by 10, 19 – 9.
Three buckets from outside the arc by Mekel and a coast-to-coast drive by put Maccabi on top, 20 – 19 with just under three left in the period.
A reverse dunk by Eidson off a steal, plus two by Fischer put a cap on a 15 – 0 scoring run by Maccabi.
A pretty assist from Mekel to under the basket finished the quarter, 28 – 25 Maccabi.

The early minutes of the second quarter saw Nahariya return to the game, tying the score at 30 – minutes.
Maccabi head coach Pini Gershon sent in fresh blood from the bench, and Maccabi’s offense came back to life, led by the super-charged Guy Pnini, who was all over the court with assists, steals and points, including a sweet three-pointer off a dandy dish from Doron Perkins.
With just under two minutes left in the half, Maccabi led by nine, 41 – 32.
Raviv Limonad made it ten when he plucked the ball away from a tangle of players on the floor and drove to the basket.
The half ended with Maccabi in the lead, 44 – 36.

Maccabi started the second half with Limonad, Pnini, Eidson, Stephane Lasme, and Maciej Lampe.
The latter immediately began strutting his stuff, scoring from under the basket, with a mid-range fade-away, and off a nice three from the corner.
His seven straight points put Maccabi up 51 – minutes of play.
Lampe continued to score, and Maccabi stayed tough on defense (including two huge blocks by Lasme).
The third period ended with the score 64 – 55.

Lasme continued to terrorize Nahariya’s shooters under the basket in the fourth quarter, and a jumper and a steal plus layup from Eidson put Maccabi’s lead at 68 – 57 with three and half gone in the period.

Lampe came back into the game for Lasme, took a bullet of an assist from Perkins and increased Maccabi’s lead to 75 – 61.
The game ended in a victory for Maccabi Electra Tel Aviv over Nahariya, 79 – 68.

“Mekel played well most of the time he was on the court,” said coach Gershon after the game.
“Obviously, once you start making substitutions, there are mistakes, the match-ups aren’t always perfect, and the flow of the game changes. Sometimes you make a substitution and a player comes in cold and makes mistakes.
These things happen.
But the game was in our hands.”
About Nahariya, Gershon said, “We stopped DeMarco Johnson, so Or Eytan stepped up.
You can’t have everything”

“We took advantage of the fact that the Maccabi players were tired after their flight (from after Thursday night’s Euroleague game),” said Nahariya head coach Ya’acov Jino, who got an excellent game from Eytan.
“I wanted us to drive to the basket more, and we didn’t put on a good offense, which would have kept the game closer.
The next couple games are important for us, and we have a lot to improve.
Our team needs to come together.”