Like the song played in pre-game warm-up, Maccabi’s game got off to a languid start that developed into an exciting display of teamwork, as they shut down Irony Ramat Gan 88 – 61 in Nokia Arena. 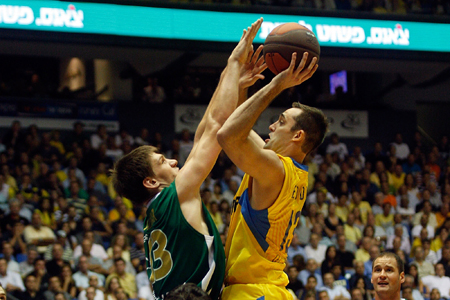 Pini Gershon’s starting five of the night were Chuck Eidson, Stephane Lasme, Yaniv Green, Andrew Wisniewski and Raviv Limonad.
Ramat Gan started with Brandon Ewing, Or Brener, Julian Khazzouh, Itzik Ohanon and Taj McCullough.
The early minutes of the game were fairly uninspired for both teams, and after two minutes Maccabi led by a score of only 2 – 1.
Limonad and Eidson were the scorers for Maccabi until Green nailed 2 of 2 from the free throw line, putting Maccabi up 9 – 4 with four and a half left in the quarter.
Lasme came alive under the basket, with a put-back and a dunk, putting Maccabi up 15 – 8.
Tight defense by Maccabi flustered the visitors, who couldn’t find the basket (and racked up the first of a couple shot clock violations of the game).

Doron Perkins, who started the second quarter, slammed down a three, made a steal and dropped in a layup to put Maccabi up 20 – 11 in the early minutes.
Maciej Lampe dropped in a nice hook shot (off an assist by Gal Mekel) to put Maccabi’s lead in double digits, 22 – 11 after three and a half minutes of play.
By the halfway mark in the period, Ramat Gan had closed to within six, 24 – 18.
D’or Fischer’s bucket plus foul opened Maccabi’s lead a bit.
With team captain Derrick Sharp’s entry into the game, the tempo ratcheted up several notches. A dunk by Fish and a classic three-pointer from David Bluthenthal set the score at 32 – 23 with under two minutes remaining until halftime.
A two-handed slam by Fischer off an assist from Sharp at the buzzer sent the teams into the halftime break with the score Maccabi 38, Ramat Gan 29.

The crowd knew it was going to be a good night when Sharp was part of the starting five in the second half, along with Wisniewski, Lasme, Eidson and Bluthenthal.
An alley-oop from Sharp to Lasme burned the roof and put Maccabi up 42 – 31 two and a half minutes into the third quarter.
A three-point swish from the corner by Eidson and tremendous hustle from Wiz with back-to-back steals + layup proved that Maccabi had definitely jumped off the sofa and kicked their game into overdrive.
Ferocious defense by Maccabi (led by Wiz) further hampered the hapless Ramat Gan (whose second shot clock violation of the night was punctuated by a block by Lasme).
An amazing one-handed 360° dunk by Eidson and points by Sharp from outside the arc put Maccabi’s lead at 56 – 35 halfway through the period.
The team continued to fight hard on defense, setting traps and fighting for steals.
The third quarter ended with Maccabi’s lead swollen to twenty-two, 64 – 42.

Maccabi’s starters in the fourth quarter were Gal Mekel, Raviv Limonad, Doron Perkins, Guy Pnini and D’or Fischer.
Pnini made good use of his time, scoring a quick two and sending an assist to Limonad under the basket, to put Maccabi up 70 – 46 after three minutes of play.
Mekel found the hoop for three and became the 12th Maccabi player to score in the game.
With three minutes remaining, Gershon sent in Bluthenthal for Perkins and made it a 100% Israeli fivesome on the court.
Green was the star of the closing minutes, scoring from everywhere (dunk, free throw line and mid-range jumper), while Mekel perfected his no-look passing.
The game ended with the score Maccabi Electra Tel Aviv 88, Ramat Gan 61.

“In the first half, our game was pretty bad,” admitted Maccabi assistant coach Sharon Drucker.
“We woke up in the second half, and you could see the difference.
That’s how we finished the game.
We need to play well the whole game, and it’s good we did that in the end.
The difference between today and last Thursday is a matter of preparedness and rotation.
There are a lot of differences between Thursday and Sunday.
Today, in the first half we had a lot of turnovers and played poorly, and it’s a good thing we woke up.
All in all, we did good work in the second half.”

Raviv Limonad:
“I mean no disrespect towards Ramat Gan, but you just can’t compare them to the opponents we’ve met up until now.
It’s natural that there would be less pressure, but I think we played hard when we needed to.”
When asked about the Israeli league, Limonad replied, “I don’t know if I can say that the level in the league is low.
If you look at the results, then maybe so, but I think we have a good league with good games.
We need to keep playing well and winning.”