After a close first quarter, Pnini led the undefeated Maccabi Electra Tel Aviv to a decisive victory over Hapoel Jerusalem at Nokia Arena. 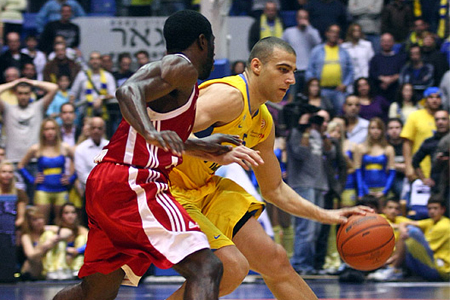 Yaniv Green, Guy Pnini, Alan Anderson, Andrew Wisniewski and Chuck Eidson opened for Maccabi, facing off against Leo Lyons, Uri Kokia, Yuval Naimi, Dijon Thompson and Tre Simmons of Hapoel.
got off to a good start in the game, with points from Simmons, Naimi and Lyons.
They were answered by Green and Eidson, and Pnini added two to put Maccabi up 10 – minutes.
The visitors didn’t panic, and thanks to Naimi and Lyons were able to retake the lead, 20 – 15 with three minutes left in the period.
Maccabi chipped away at the deficit, including 4 straight points by and a pretty jumper plus foul for Eidson.
A long three from Doron Perkins tied the score at 27 with seconds remaining, but Naimi scored as the clock ran out, giving Jerusalem a 29 – 27 lead.

Guy Pnini kicked off the second quarter with two shots from outside the arc to put Maccabi on top 33 – 31.
Raviv Limonad added a three pointer of his own, and Pnini nailed a long fade-away to make it 39 – 33.
D’or Fischer, with a put-back, a bucket and a huge block on Thompson kept up the pace, and another three from Limonad made it a double digit lead, 48 – 36, Maccabi.
The home team played a strong, tight defense, allowing only 11 points in the period, and the half ended with Maccabi leading 53 – 40.

The start of the third quarter saw Sharon Shason come to life with three key shots from outside the arc to put Hapoel back in the game, 55 – 48.
Wiz answered with a huge three of his own and a strong drive to the basket for another two.
At the other end of the court, Fish completely shut down Hapoel big man Brandon Hunter, and Wisniewski nailed another long three to make it 63 – 54 near the halfway mark in the period.
Pnini added another five points for Maccabi and Eidson dished up two off an assist from Fischer, taking Maccabi’s lead to thirteen, 70 – 57 with three minutes left in the quarter.
Wisniewski went to warp speed as only he can do, with a steal plus layup, while a layup from Pnini set the score at 76 – 59 with just over a minute on the clock.
Another three from Pnini in the corner finished off the period, with Maccabi leading 79 – 64.

A three from Eidson and a putback dunk by Stephane Lasme got things started for Maccabi in the final period.
The sequence was repeated with Eidson rattling another long one in from the corner and Lasme adding another dunk off an assist from Eidson, putting Maccabi up 90 – 66.
After an air ball by Pooh Jeter for Hapoel, the visitors called for a time out with four minutes left in the game.
When the teams retook the floor, Maccabi team captain Derrick Sharp was in the game, much to the delight of the crowd.
A catch and shoot for three by Sharp made it a 95 – 69 game.
In addition, Sharp was a demon on defense, nearly stripping the ball from Yogev Ohayon of .
Hapoel continued to fire blanks, with Shason and Ohayon hitting nothing but air in their attempts to create points.
Perkins, on a short flight to the basket, had time to pass the ball around his waist before scoring.
The game ended in a huge victory for Maccabi Electra Tel Aviv over Hapoel Jerusalem, 103 – 78.

After the game, coach Pini Gershon said, “I was happy to see a full house, and I hope we gave the fans a little something after the game on Thursday.
played well in the first quarter, and after that we guarded better, but all in all we played the right way.”
When asked about the upcoming lottery for the Euroleague Top 16, Gershon said, “May God help us.”

Guy Pnini (who was outstanding, with 23 points) said, “We didn’t get off to a good start offensively, but later we brought more energy to the game.
Fischer and Lasme were a huge help, and from there we just took off and left in our dust.”

Before the game, Shimon Mizrahi spoke about the draw for the Top 16: “I’m not giving up, and without any connection to the lottery we know it’s going to be tough.
We need another big player, but we’re not going to take just anyone.
We want someone we can build on for the next two years.
I hope the schedule we have in front of us doesn’t end up hurting us.”

“This game did not reflect the real difference between Hapoel and Maccabi,” insisted head coach Guy Goodess after the game.
“They were more aggressive, ran faster and got to the ball quicker.
As far as I’m concerned, rebounds are about who wants it more, not who jumps higher.
We need to go back to practice and work harder, to go back to basics and to fight harder,” added the losing coach and former player and assistant coach for Maccabi.
“We have a tough game coming up on Saturday against Maccabi Haifa, and there’s no time for looking back.”