Maccabi Electra Tel Aviv’s victory over Barak Netanya gave them a 21 – 1 record for the season. Bnei Hasharon awaits in the best-of-five playoffs. 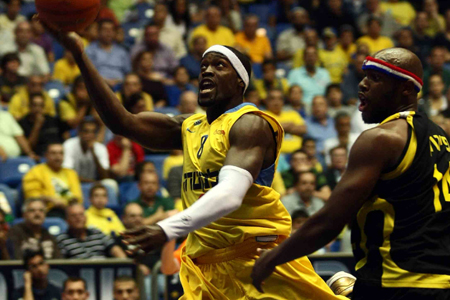 The game started off at a brisk pace that didn’t manage to convert to points; halfway through the first quarter the score was tied at 8.
Netanya took the lead off a fast break, and Maccabi spent the rest of the period playing catch-up.
Killingsworth nailed two from the foul line to give Netanya their biggest lead, 17 – 10 with just over two minutes on the clock.
David Bluthenthal’s catch and shoot from the corner put Maccabi within three, 17 – 14 with a minute left, but points by Pinnock finished out the period with Netanya in the lead, 19 – 14.

Bluthenthal scored again from the corner to put Maccabi within two, two and a half minutes into the second quarter.
Doron Perkins’ dish to trailer Pnini tied the score at 21, but Killingsworth answered for Netanya.
Bluthenthal grabbed the lead for Maccabi with yet another three pointer, making it 24 – 23.
Perkins flew coast-to-coast to put Maccabi up 26 – 23, but Tony Younger sank a shot from outside the arc to tie the game yet again.
Pnini drained a bomb from the top of the arc to give Maccabi the lead, 29 – 26 with four minutes left in the half.
Fish dominated the defensive boards, and Eidson dropped in a pretty jumper to put Maccabi up 36 – 29 with less than a minute until halftime.
Fischer’s putback gave Maccabi a 38 – 31 lead going into the break.

Netanya came out of the locker room fired up, and within two and a half minutes had tied the score, 38 – 38.
Wisniewski’s drive-by layup put Maccabi back on top, and Alan Anderson added points in the paint.
Pnini scored from the corner halfway through the period to give Maccabi a seven point lead, 47 – 40.
Netanya, led by Washam, tried to come back but Maccabi held on to the lead, extending it to 52 – 43 off an Eidson steal plus dish to Wiz for the layup with two minutes left in the quarter.
Stephane Lasme sank a jumper from the circle and Bluthenthal scored yet again from three point range at the buzzer; the quarter ended with Maccabi up by fourteen, 61 – 47.

Yaniv Green opened the fourth quarter for Maccabi and immediately made his presence felt with three defensive boards and a jump shot.
Wisniewski added three points from the corner and Maccabi’s lead grew to seventeen, 66 – minutes.
Green remained tough on defense, adding a blocked shot to his stats as well as an off-balance one handed bucket for two more points.
Wiz and Anderson each added three pointers and Maccabi’s lead swelled to twenty, 74 – 54 with four minutes left in the game.
When Derrick Sharp pulled off his warm-up jacket and subbed in for Wisniewski, the crowd went wild.
Netanya’s Younger fell, spread-eagled, on the floor under his own basket, and Perkins plucked the ball out of his hands and sped down court, sending a last second behind-the-back dish to Green for the dunk.
scored off the glass and then dunked an oop from Perkins.
When Sharp set up to shoot from the left corner, Uriya Gur tried to knock Maccabi’s captain into next week.
But no one keeps the Sharpshooter down for long; Derrick dusted himself off and drained all three shots from the charity stripe with 28 seconds left in the game.
An alley-oop to Perkins missed the mark, but number 11 recovered and sent home three more points at the buzzer, giving Maccabi Electra Tel Aviv an 88 – 60 win over Barak Netanya.

After the game, Maccabi head coach Pini Gershon talked about the playoffs: “Every game it matters who you’re playing against.
I don’t choose the opponents; we’ve got Bnei Hasharon and we’ll deal with them.
That’s how it worked out, and they’re a lot better than they were at the start of the season.
They have a strong forward line.
No game is easy, and certainly not in the playoffs.”

One of Maccabi’s outstanding players in the game, Guy Pnini, who scored 14 points, said, “I think one of the reasons we got off to a bad start in the game was the long 10-day break we had coming in.
We started off badly and didn’t have our rhythm, but as the game went on we found our pace and played our game.”

About the playoffs, Pnini said, “I hope in the playoffs we’ll play well from the beginning.
Now our goal is the playoffs; Bnei Hasharon is a great team.
They’re not really an eighth place team.
We’re going to prepare well and come to the series ready, to the best of our abilities.”