An Easy Win over Gilboa/Galil

Maccabi Electra Tel Aviv easily defeated Gilboa/Galil (87 – 65) in the semi-final of the Winner Cup in a game that was over by halftime. They will face Hapoel Jerusalem in the final tonight (Thursday) 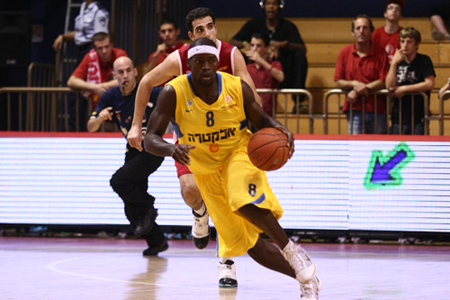 Maccabi got off to a slow start and fell behind quickly.
Points by Eidson and Limonad brought Maccabi within one, 7 – minutes of play. Maccabi took the lead briefly; then a number of turnovers stopped their momentum.
Gilboa retook the lead, and the score stood at 11 – 8 with two and half minutes left in the period.
Doron Perkins entered the game for Maccabi and scored 5 straight on an 8 – 0 scoring run, to give Maccabi an advantage they would not lose again.
The quarter ended with the score 16 – 11, Maccabi.

The second quarter started well for Maccabi, with Stephane Lasme and Maciej Lampe joining Perkins on the court and expanding Maccabi’s lead to 23 – 11 with two minutes elapsed on the clock.
Neither team played its best in the following minutes, but Maccabi protected their lead and the score stood at 30 – 19 with three minutes left until halftime.
With time running out in the period, Maccabi didn’t let up, going on a 12 – 1 scoring run filled which included a long three-pointer from Wisniewski and a baseline shot from Yaniv Green, plus strong defense.
Another smooth shot from Wiz at the buzzer sealed the half, and Maccabi headed to the locker room with a satisfying 42 – 20 lead.

Maccabi seemed to hold back at the start of the second half, which allowed the Israelis on Gilboa to put some points on the board, and a technical called on Lasme also helped them narrow their team’s deficit to 46 – minutes.
came back into the game, scoring twice from outside the arc within about a minute and giving control of the game to Maccabi. Gal Mekel buried a three-pointer from the corner to put the score at 57 – 33 with four minutes left in the quarter.
Lampe’s spin-and-shoot fade-away off an assist from Anderson, plus two more shots from downtown by Anderson (4/5 from three point range), gave Maccabi a 66 – 41 lead.
The quarter ended with Maccabi comfortably in the lead, 66 – 44.

The fourth quarter was a shot-fest for the two teams, most notably with Maccabi’s team captain Derrick Sharp showing he’s still got the touch on two silky shots, one from two-point range and one from outside the arc.
The game ended with Maccabi still leading by 22.
Final score: Maccabi Electra Tel Aviv 87 – Gilboa/Galil 65.

Gilboa/Galil: Dowell and Yavzuri 12 point each; Randle 11 points; Moscovitz and Kadir 7 points each; Gordon and Swann 6 points each; Segev and Pargo 2 points each.

Pini Gershon: “We defended well in the first quarter, but we missed some good shots.
Nothing that happened on the court was planned.
I’m trying to follow the Russian Rule (that there must be at least two Israeli players on the court at all times).
I think that when David (Bluthenthal) is healthy again, we’ll have an easier time in the Israeli league.”

When asked about Lampe, who, it seems, hasn’t yet gelled with his teammates, Pini said, “As you know, Lampe joined the team late.
He’s dependent on the team game, and the fight for position isn’t easy.
Along with that, Stephane Lasme has surprised me in a good way.
Lampe is in a period of proving himself; he just needs one good game to regain his confidence.”
About the final to be played against , Pini said, “I think the players will be sharp.
It also won’t be easy for to play twice in two days.”

Alan Anderson, who was outstanding with 15 points, said, “I try to be the go-to guy.
It could be any given night that someone takes the lead.
I’ve heard about the rivalry with .
It’s going to be a big game. They have home court advantage, but I’m excited to play them.”