Thanks to a stellar effort by Alan Anderson (23 points), Maccabi took the win at home over Efes Pilsen. Next up: the fight for the Israel Cup. 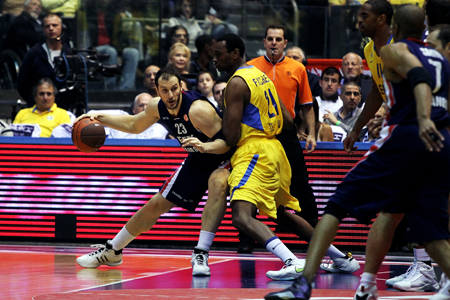 Both teams looked disorganized at the start of the game, but points by Fish and Pnini, plus a three from Wiz gave Maccabi a 10 – 6 lead halfway through the period.
The Turkish team came back hard, with stops and steals that tipped the lead into their hands 11 – 10 with three minutes left in the quarter.
A putback by Eidson gave Maccabi back the lead and started a 6 – 0 run for the home team.
Maccabi’s bench closed out the quarter: Stephane Lasme dropped in a couple of freebies, while David Bluthenthal and Doron Perkins each sent home buckets to give Maccabi an 18 – 13 lead at the end of the first quarter.

Maccabi came out full of energy in the second quarter, and held Efes Pilsen scoreless for the first three minutes.
dazzled from the corner and up the middle, putting Maccabi up 24 – minutes.
Fischer, who had a good night, contributed a putback and, after a short flight to the basket off an assist from Wisniewski, dropped one in off the glass to make it 29 – 21, Maccabi.
The venerable Daniel Santiago came into the game for Efes Pilsen and made his presence felt; he and Smith helped the visitors narrow the gap as the clock wound down towards halftime.
Five points by Pnini put the finishing touches on the half and the teams headed into the locker room with Maccabi leading 36 – 33.

The visitors kept breathing down Maccabi’s neck at the start of the third quarter, but a coast-to-coast and a pretty fade-away by kept the home team in the lead.
The visitors fought back and with three minutes elapsed tied the game at 42.
The next few minutes were a battle for the lead, with the score seesawing back and forth.
Two points by from the charity stripe closed out the period with Maccabi leading by two, 51 – 49.

The game stayed close in the early minutes of the fourth quarter until a reverse layup by Anderson put Maccabi in the lead for good, 57 – 55 with six minutes left in the game.
Maccabi opened up a five point lead thanks to a classic catch and shoot from Bluthenthal, but the visitors refused to call it a day.
The home team kept the pace up, capping off a 9 – 0 scoring run with points by Bluthenthal from outside the arc off an assist by Eidson, plus a dunk by .
With half a minute remaining, Maccabi’s lead was 72 – 60.
Efes Pilsen had time to chip in a couple of free throws before the clock ran out on the second straight victory for Maccabi Electra Tel Aviv in the Top 16, 72 – 62 over Efes Pilsen.

“We played the whole 40 minutes.
We played together and hard, and when we do that we’re tough,” concluded Alan Anderson after the game.
“I hope we’ll keep it up.
These guys can score from anywhere on the court.
If we get some stops on defense and take rebounds it’ll be hard to stop us.
We’ve got the desire and the faith.”

“On a day when you score 72 points and make 18 turnovers, you have to have good defense.
It was an important win,” said head coach Pini Gershon. Looking ahead to the game against Efes Pilsen in in two weeks, Gershon added “I don’t think they’ll be 2 of 20 from three point range at home.
If it’s possible to guard better, we’ll need to do it.
We need to protect the ball better and to force them into more turnovers.”

“We were able to keep their top scorers to just a few points,” the coach continued.
“Some of them barely scored at all.
The problem is that under the basket we should have guarded better.
Mentally, it wears you out, and then you make mistakes.
There’s no doubt that we didn’t do a perfect job.
The next game against Pilsen is an important one; very important, even.
And every win we get makes the next game even more important.”

Gershon concluded, “We could have made things easier on ourselves today.
If you had asked me ahead of time if I wanted the game to end with a ten point difference, I would have been happy.
So, I’m happy.
We had 18 turnovers, some of them dumb ones.
Rakocevic could easily score 25 points in the next game.
Not many players can guard one-on-one; he has a really fast first step and his shooting has improved.
He’s made it this far and I really hope he’ll keep playing at least at this level.”