Maccabi scored a record-breaking 43 points in the final period to defeat Montepaschi Siena 97 – 82 and qualify for the playoffs. Anderson was outstanding with 24 points. Next week, Maccabi faces Real Madrid. 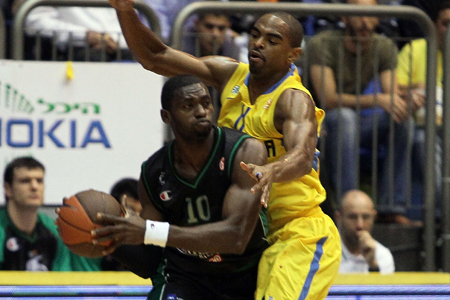 Maccabi got off to a quick lead early in the first quarter, but free throws helped Siena tie the game at 4 after two and a half minutes.
Maccabi pulled ahead again, but couldn’t manage more than a three point lead until Wiz stole the ball and sent it to Eidson for a dunk at the other end, making it 13 – 8, Maccabi, at the halfway mark in the period.
With just under two minutes on the clock, Siena took the lead for the first time, 18 – 17.
Stephane Lasme drove up the middle to put Maccabi back on top, 19 – 18.
Points by Henry Domerçant put Siena ahead as the first quarter ended, 21 – 19.

A putback by Lasme early in the second quarter tied the score at 21.
The lead changed hands a few times in the early minutes, with the score 26 – 23, Siena, after three and a half.
Maccabi got tough on defense, forcing a shot clock violation on Siena, and Doron Perkins went to work, scoring four straight from the free throw line, stealing the ball twice and throwing down a layup to make it 29 – 26, Maccabi.
The first three pointer of the game was a classic catch-and-shoot by David Bluthenthal, halfway through the period, which put Maccabi up 32 – 26.
It was soon followed by three from Eidson off an assist by – who else? – Perkins, who then went on to add two more of his own, giving Maccabi their biggest lead of the game so far, 37 – 29 with less than four minutes left in the half.
McIntyre and Hawkins scored to keep Siena close, but the half ended with Maccabi leading 43 – 37.

Siena tightened up their defense at the start of the third quarter, and Lasme got into foul trouble, which enabled the visitors to score in the paint.
Halfway through the period the score was tied at 47; seconds later, Siena retook the lead and kept it through the end of the quarter.
Fischer drained a mid-range jumper with less than a minute remaining to bring Maccabi within three, 57 - 54.

Siena scored in the opening seconds of the final quarter to extend their lead to five, but Maccabi wasn’t having it.
Perkins nailed one from downtown to make it a two point game.
Wiz with a layup and one put Maccabi within one.
A bucket from Anderson at the top of the arc tied the game at 63 with seven minutes remaining in the game.
The visitors quickly retook the lead, and Maccabi fought to stay close.
Bluthenthal fired off a long range missile, tying the score at 70; on the flip side Eidson pulled down a defensive rebound and sent a bomb of a pass to Anderson at the other end and Maccabi once again led, 72 – 70 at the halfway mark.
Domerçant was fouled at three point range and took advantage, but Anderson and Maccabi quickly grabbed the lead and decided to keep it.
Strong defense by Maccabi forced another shot clock violation on the visitors, and Maccabi switched into warp speed.
Fischer had some good minutes, including a putback, a huge block on McIntyre and points off a nice dish from Anderson; with a minute and a half remaining Maccabi led 83 – 78.
Aside from a bucket by Domerçant, Siena’s only points from then on came from the charity stripe, while Maccabi went on a rampage, scoring fourteen more points in the last minute and a half.
Almost half of those points were courtesy of Maccabi’s outstanding defense, which forced Siena to turn over the ball and then capitalized at the other end.
With seconds remaining and Maccabi leading 93 – 82, Siena tried to inbound the ball but were stopped first by Anderson, who grabbed the pass and thrilled the home court fans with a two handed dunk, and then by Wiz, who finished off the game with a classic layup.
Thanks to their 97 – 82 win over Montepaschi Siena, Maccabi Electra Tel Aviv has qualified for the Euroleague quarterfinals.
Next week’s game at Real Madrid will determine who takes the top slot in Group F.