The home-town crowd of over 20,000 spurred Partizan Belgrade on to victory over Maccabi Electra Tel Aviv. The Serbs now lead the series 2 – 1. 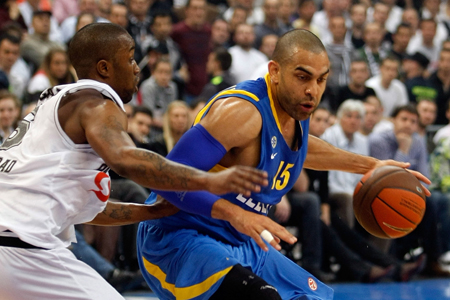 Partizan opened strong against Maccabi and took the lead in the first minute of the game.
Maccabi had trouble guarding in the paint, and at the other end couldn’t get their shots to drop.
After four minutes of play, Partizan’s lead had grown to 13 – 6.
The pace of the game was controlled by the Serbs from the start, and Maccabi couldn’t find their rhythm.
In a rare score in the paint, Eidson sent an alley oop to Fischer for a dunk, making it 18 – 11 with less than four minutes remaining in the period.
Partizan continued to drop in easy baskets while Maccabi struggled, even from the charity stripe.
A bucket by Doron Perkins at the buzzer wrapped up the first quarter with Partizan in the lead, 26 – 17.

An oop from Stephane Lasme to Perkins got the second quarter started, but Kecman responded for Partizan with a three pointer to put the hosts up by ten, 29 – 19.
Partizan continued to score at will under the basket, while Maccabi for the most part still couldn’t find the net.
Eidson nailed a mid-range bucket and added some free throws to keep Maccabi in the game.
An oop from to Lasme with three and a half minutes left in the half was joined soon after by a catch and shoot by Eidson from outside the arc, making it 42 – 30, Partizan.
Wiz and Fish added more points from the free throw line, but Maccabi went into halftime trailing 47 – 34.

The early minutes of the third quarter were dominated by Fischer, who drained a couple of mid-range jumpers and dished to Lasme for a layup, putting Maccabi within seven, 47 – 40, after two minutes.
A 9 – 0 run by the home team put Maccabi down by sixteen, 58 – 42 with three and a half minutes on the clock.
Fifty percent free throw shooting in the period and a three pointer from David Bluthenthal weren’t enough to help Maccabi narrow the gap by much, and the period ended with Partizan leading 64 – 50.

The start of the fourth quarter looked promising for Maccabi, with threes by Wiz and and excellent defense by Maccabi forcing a shot clock violation on Partizan after three minutes of play.
A steal by Perkins led to a classic Bluthenthal catch and shoot, putting Maccabi within ten, 71 – 61 at the halfway mark in the final period.
Points by Eidson, Fischer and Anderson kept Maccabi in the game, but Partizan kept dropping in shots both from under the basket and the foul line to protect their lead.
A three pointer by Wisniewski at the buzzer set the final score at Partizan Belgrade 81, Maccabi Electra Tel Aviv 73.

“We got off to a bad start and gave away the game at the beginning,” said Maccabi head coach Pini Gershon.
“There’s no reason to give the crowd too much credit for the victory.
It didn’t have much of an impact and our players didn’t even think about it.
I never heard of a coach or player who didn’t finish a game alive because of the crowd.
What was hard for us to deal with was their 19 offensive rebounds and our 22 turnovers.”

When asked about the upcoming game on Thursday, the coach said, “It’s a game for the entire season for both teams.
You’ve said that qualifying for the Final Four is an achievement.
If we were a legitimate Final Four team, it wouldn’t be such an achievement, but we’re not.
The story of rich versus poor and big budgets is meaningless.
I think we’re not inferior to them, but we made mistakes and they cost us.
They played better than we did and deserve the win.
The players promised me we’d win it in three games; they didn’t keep their promise.”

Andrew Wisniewski, who scored 8 points in the game, said, “We had too many turnovers and never got a chance to get some momentum.
We’re going to have to really fight on Thursday for that momentum; and to really put ourselves in a better position than we were in tonight.
We knew we were coming here for two games, and now we really need to be focused.
We never had a chance, I don’t think, to win tonight.”

Doron Perkins added, “It was us; we didn’t take care of the ball.
They got the offensive rebounds and that just killed us.
Everybody saw it; that was the change in the game.
We couldn’t get rebounds, we couldn’t run it, so they played their style of game and they’re better at that, so we’ve got to change it up in the next game.”

D’or Fischer said, “We didn’t do our job.
Now we need to rest a little and come ready for Thursday.
We know we can beat them.”

David Bluthenthal spoke briefly: “We lost the game on rebounds.
We should have closed them out better.”