Maccabi Electra Tel Aviv fought and scratched to stay in the game for thirty minutes, but fell short in the fourth quarter, losing the game and the series (3 – 1) to Partizan Belgrade. 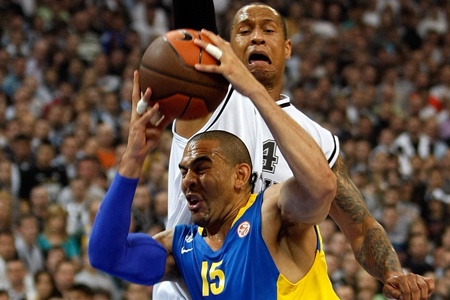 Partizan took the lead early in the first quarter while maintaining their usual slow pace, and after two and a half minutes led by a score of 6 – 3.
Maccabi fought hard to keep the game close, with Fischer and Eidson scoring for the visitors.
A three pointer from Wiz on the right wing gave Maccabi the lead, 12 – 9, with four and a half minutes left in the period.
Doron Perkins drained one from outside the arc to put Maccabi up by four, 15 – 11, a minute later.
Maccabi stayed tough on defense to protect their slim lead, but in the closing seconds of the quarter hosts Partizan scored on a layup to retake the lead, 18 – 16.

The start of the second quarter belonged to Fischer, who scored six straight points for Maccabi, delivered an assist to Perkins and blocked a shot on defense to put the team from Tel Aviv up 24 – 21 after three and a half minutes.
A foul by Partizan and a technical called against their coach added four more to the kitty, and an alley oop from Anderson to Lasme made it a six point lead for Maccabi, 30 – 24 at the halfway mark.
Partizan wasted no time in closing the gap, though, retaking the lead with three and a half minutes left in the half.
Wiz kept Maccabi in the game with a shot from downtown and two from the free throw line, but two successive goaltending calls against Lasme gave Partizan a 38 – 35 lead going into halftime.

David Bluthenthal scored at the start of the third quarter to put Maccabi within one, and was followed by a three pointer by Eidson to give Maccabi the lead, 40 – 39.
Partizan took it back, but a jumper by Fish tied the score at 42.
Bozic scored from three point range but was answered by Fischer, who put Maccabi within one, 45 – 44 with four minutes left in the period.
Maccabi continued to fight hard on defense, but only managed points from the charity stripe until a layup by Wiz at the end of the quarter set the score at 55 – 52, Partizan.

Maccabi looked tired in the final quarter and couldn’t get their shots to drop. Partizan broke the game open with a 9 – 0 scoring run, taking a 69 – 55 lead at the halfway mark.
Lasme fouled out with three and a half minutes left in the game, and was followed soon after by Wisniewski (who scored from three point range before making his exit) and Perkins.
Partizan made a string of easy buckets in the paint, while most of Maccabi’s points in the period came from the foul line.
In the end, Partizan Belgrade defeated Maccabi Electra Tel Aviv by a score of 76 – 66.

After the game, Maccabi head coach Pini Gershon had this to say: “It could be that we’re just not good enough to beat a team like this away from home.
I congratulate Partizan on the win and their advancement to the Final Four.
I wish them luck.”
When asked about the games of three of his stars, the coach commented, “The question is, what are the alternatives to Anderson, Bluthenthal, and Eidson?
We said before the game that if we force shots and don’t play as a team, we won’t get anywhere.
We got here as a team, not as individual players.
In the last two games, we didn’t play as a team.
I think that the better team won.”

“If you ignore the outside influences, I think that they were better than we were in a lot of ways,” the coach added.
“I can’t really complain.
I don’t even know whether in the last two games we scored a single basket in the paint.
Even though Maric wasn’t great on defense, he and Vranes are a big advantage for their team.
They took most of the rebounds.”

“We got a gift when we beat Madrid, but they also got a gift,” the coach continued.
“I said at the beginning of the season that there would be a dark horse in the Euroleague, and it turned out to be a black and white one (the team colors of Partizan).
It could be that the whole thing was decided in that first game at Nokia, but you don’t cry over spilled milk.
It was there we lost the home court advantage, and you can see the significance that has.
Good for them that they brought out so many fans.
It’s a big disappointment, because we all had high expectations.
I’m not sure that with this team we’ll have another opportunity like we had this year.
We need to strengthen the team.”