Maccabi in the Final

Maccabi Electra Tel Aviv advanced to the Final thanks to their 104 – 78 win over Barak Netanya at Nokia Arena. Seven players scored in double figures. They face Gilboa/Galil in the Final on Thursday. 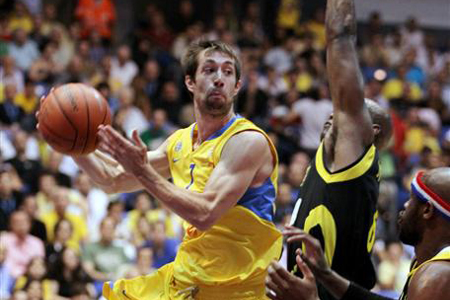 In an inspired demonstration of teamwork and ability, Maccabi Electra Tel Aviv breezed past Barak Netanya 104 – 78 in the semi-finals of the Israeli Super League and will face Gilboa/Galil in the Final.
They took the lead in the first minute of the game and never looked back; by halftime Maccabi led by 28 points.
Seven Maccabi players scored in double figures, with MVP Guy Pnini leading the pack with 16.
The devastatingly effective Doron Perkins dished out 7 assists.
Gilboa/Galil advanced to the finals with their 79 – 69 defeat of Hapoel Jerusalem.

A pair of free throws by Pnini kicked off the scoring in the first quarter.
For the first few minutes Netanya nipped at Maccabi’s heels, with the teams trading baskets and keeping the pace brisk. A pair of three pointers from Doron Perkins and Pnini signaled the start of a 12 – 2 scoring run for Maccabi.
With just over four minutes left in the period, Bluthenthal dished to Wiz to make it 15 – 7.
The second half of the quarter mirrored the first, and Maccabi’s 14 – 4 run was highlighted by a pair of threes by Wiz and a spectacular bomb from the corner at the buzzer by Pnini.
The quarter ended with Maccabi’s lead at fifteen: 29 – 14.

Maccabi came out strong in the second quarter with points from Fischer and Pnini in the paint and two buckets from outside the arc by Perkins, the second of which gave Maccabi a twenty point lead, 40 – 20, with three minutes gone.
Instead of relaxing and enjoying that cushion, Maccabi stepped up the pace.
Pnini and Eidson sent home two more shots from downtown and Yaniv Green continued to do battle under the basket on defense.
Eidson added three more with a slick layup along the baseline and one, and Alan Anderson’s stop and pop gave Maccabi a thirty point lead for the first time in the game, 56 – 26, with less than three minutes left in the half.
What little Pinnock and company were able to accomplish in the remaining minutes before halftime fell far short, and the teams went into the break with Maccabi leading the lightning-struck Netanya 60 – 32.

In a sign of how fast-paced the first half was, the third quarter seemed to start off slowly, with occasional misses, and points scored in the paint or from the foul line.
At the halfway mark in the period, Maccabi had scored eleven points and Netanya only nine.
Anderson scored a slick reverse layup off an assist from Bluthenthal, then dumped in the and one to make it 71 – 41, Maccabi, with just over five minutes on the clock.
Maccabi’s first points in the period from three point range came off a Bluthenthal catch-and-shoot with two and a half remaining, 76 – 48.
A pair of freebies by Raviv Limonad put the lead back up to thirty; the Israeli guard added another two points on a smooth layup, and sent a perfect alley oop to Anderson for a dunk at the end of the quarter, making it 84 – 51.

Limonad stayed hot at the start of the fourth quarter, scoring eight points (including a bucket from outside the arc) in the first three and a half minutes, giving Maccabi a thirty-three point lead: 92 - 59.
Green added three more with a putback plus one from the charity stripe, while team captain Derrick Sharp (who started in both the second and fourth quarters) was his usual stellar self on defense.
Limonad added two more points to make it 99 – 68 with three minutes left in the game.
Maccabi fans were on their feet, screaming for someone to get the ball to Sharp.
Eidson delivered in the final seconds of the game with a brilliant fake to the basket that turned into a dish to Sharp in the corner for three.
Final score: Maccabi Electra Tel Aviv 104, Barak Netanya 78.