Maccabi Falls in the Final; Gilboa Galil are the New Champions 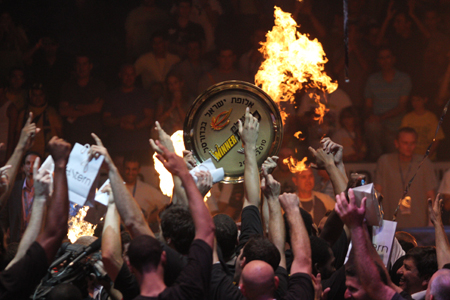 Gilboa Galil grabbed the lead and set the pace early in the first quarter; by the halfway mark the score was 11 – 8, Gilboa.
A putback by Yaniv Green put Maccabi within one, then Eidson scored the go-ahead points with two from the charity stripe with less than four minutes on the clock, 12 - 11.
A one-handed slammer by Eidson gave Maccabi more breathing room.
Mekel briefly tied the score at 14, but Doron Perkins came in and took charge, draining a beauty from the top of the arc with just under two minutes left.
Free throws by Perk and Pnini rounded out the period, with Maccabi clinging to a one point lead, 21 – 20.

Maccabi looked crisp and in charge in the second quarter.
The tempo of the game picked up, with a steal by Perkins and points scored by Bluthenthal (putback), Eidson (layup plus foul), and Pnini (layup and a bomb from the left side).
After three minutes of play, Maccabi had scored ten points.
Gilboa fought hard to stay in the game, but Perkins continued to shine on defense, harassing Gilboa and taking the ball from them again.
Fish followed up a finger roll with a slick reverse dunk which set the score at 36 – 35, Maccabi, halfway through the period.
Perk added a smooth finger roll of his own, and Pnini calmly drained a three pointer after nearly bobbling the ball.
With just over three minutes left in the half, Maccabi led 41 – 35.
Perkins, Anderson and Fischer all scored from the free throw line to keep Maccabi ahead, and Perk closed out the half with a drive in the paint.
Score at the half: Maccabi 50, Gilboa Galil 42.

The halftime break seemed to breathe new life into Gilboa, who slowed the pace once again, playing aggressively but not scoring much.
They succeeded, however, in holding Maccabi scoreless for the first five minutes of the quarter, until Pnini nailed a three pointer from the left corner to make it 53 – 47.
Randle, Kadir, and company responded, and wrestled the lead away from Maccabi, 56 – 53 with three minutes left in the period.
Wisniewski fought his way to the basket to put Maccabi within one, 56 – 55 at the two minute mark, but Pargo’s three cracked open Gilboa’s lead, while Wiz was called for his fourth foul.
Yet another steal by the relentless Perkins ended in a dunk by Eidson which put Maccabi back within one, 60 – 59 with a minute left, but Kadir sank a three pointer at the buzzer to finish the period with Gilboa in the lead, 63 – 59.

The start of the final quarter looked promising for Maccabi, as Eidson kicked it off with a three pointer from the left wing after only 11 seconds.
Randle and Dowell scored to stretch Gilboa’s advantage, but points by Pnini under the basket (assist: Eidson) put Maccabi back within three, 67 – 64 after two minutes of play.
More points by Gilboa resulted in an eight point lead until Bluthenthal drained a catch and shoot as the shot clock screamed, putting Maccabi within five, 72 – 67.
There was a lot of shoving and juggling for position as Maccabi fought with all they had to stay in the game.
At the halfway mark in the period, Gilboa’s lead had grown to ten, 77 – 67.
Two more steals by Perk were not capitalized on, and Maccabi didn’t find the basket again until Bluthenthal sank two free throws with three and a half minutes left in the game, 77 – 69 Gilboa.
Perkins fouled out and was quickly joined on the bench by Pnini, as the ten-man Maccabi team continued to be called for fouls (32 in the game, compared to Gilboa’s 23).
Maccabi continued to fight, with Anderson stepping up and scoring five points in just over a minute.
With less than a minute and a half on the clock, Gilboa led by only four points, 78 – 74.
Team captain Derrick Sharp, who saw lots of playing time in this game, came back in to fire up the team and the crowd, but Gilboa scored five from the foul line to set the score at 84 – 74 with 34 seconds left on the clock.
A dunk by Randle was followed by three from Sharp, who hung suspended in mid-air at the top of the key, making it 86 – 77 with 15 seconds left in the game.
Still more free throws for Gilboa finished things off, and the game ended in a victory and a championship title for Altshuler Shaham Gilboa Galil, who defeated Maccabi Electra Tel Aviv 90 – 77.